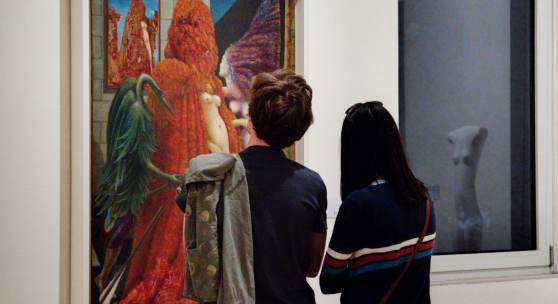 A new record has been made at the Peggy Guggenheim Collection, which closed 2015 by exceeding 400,000 visitors for the first time since the opening of the museum in 1980. 400,741 people, averaging 1,266 a day over the course of 316 open days, included 8,350 participants in exhibition openings, special visits, private and institutional events.

2016 will center on postwar art: three exhibitions, each of them curated by Luca Massimo Barbero, Associate Curator of the Venice museum, with some of the great names that have left their mark on the national and international artistic stage in the second half of the 20th century, will shine light on three aspects of Italian, European and American art beginning after the end of World War II up to the 1970s, with a focus on developments in Italy in the 1960s. Three exhibitions that also traverse the enlightened career of patron and collector Peggy Guggenheim.

From 23 April (through 19 September), the Peggy Guggenheim Collection presents Imagine. New Figuration in Italian Art 1960-1969. This exhibition explores for the first time an ideal mapping of artistic research in Italy in the 1960s, along an axis between Rome and Turin, that deployed new ideas of figuration and of the image. Approximately 50 works of art will document this prolific and inventive decade, including that of Franco Angeli, Mario Ceroli, Domenico Gnoli, Giosetta Fioroni, Tano Festa, Jannis Kounellis, Fabio Mauri, Francesco lo Savio, Giulio Paolini, Michelangelo Pistoletto, and Mario Schifano. This exhibition offers examples, trends, insights and peculiarities, and sheds light on the bond and continuity between tradition and contemporaneity defining this generation of artists, representing Italy’s contribution to the international avant-garde of the time.

Opening 12 November, the Peggy Guggenheim Collection pays homage to Tancredi Parmeggiani (1927–1964), a painter of huge talent discovered by Peggy Guggenheim in the richly creative postwar period of the 1950s in Venice. Tancredi made an instant impact as one Italy’s most original painters of his time in Italian contemporary art. He was the only artist after Jackson Pollock to be placed under contract by Peggy Guggenheim, who energetically promoted his work, gave him studio space, and organized exhibitions, including a memorable solo show in Palazzo Venier dei Leoni in 1954. With approximately 50 works, the show surveys his Venetian beginnings and his dense production in the 1950s.

Worth noting are two other exhibitions which the Peggy Guggenheim Collection is helping to organize and promote in the course of the year: from 19 March (through 24 July), the much-awaited exhibition From Kandinsky to Pollock. The Art of the Guggenheim Collection will be held in Palazzo Strozzi, Florence, in collaboration with the Fondazione Strozzi. This major event brings to Florence more than one hundred works, many of them masterpieces, of European and American art, in a narrative that reconstructs relationships and ties across two sides of the Atlantic through two leading American collectors and their museums, Peggy Guggenheim and Solomon Guggenheim. Secondly, from 10 June to 9 October, the exhibition Art of This Century. Peggy Guggenheim in Photographs at the Ikona Gallery, the historic gallery of a Živa Kraus in the Campo del Ghetto Nuovo, Venice, will mark the 500th anniversary of the Jewish Ghetto. A selection of approximately 20 images, mainly from the archives of the Peggy Guggenheim Collection, will render homage to this great patroness, a key figure in 20th century western art. Among the well-known photographers whose photographs will be in the exhibition are Berenice Abbott, Man Ray, Roloff Beny, Gianni Berengo Gardin, and Gisèle Freund.