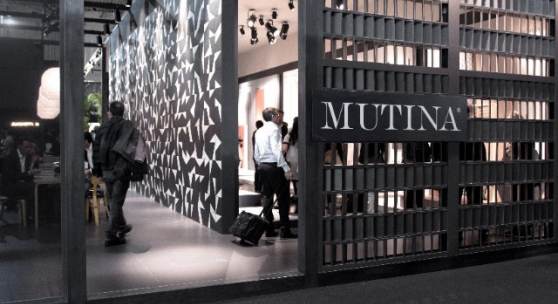 APRIL 2016 - The new Puzzle and Mistral tile collections designed for Mutina by Edward Barber and Jay Osgerby have launched this week at Salone del Mobile in Milan. Inspired by geometry, colour, patterns and versatility of use, both Puzzle and Mistral have been designed to allow the user to create their own unique spaces thanks to the adaptable nature of the collections.

Mistral
“The Mistral tile started from a simple detail taken from Italian ancient barns and farm buildings. Often seen in the countryside are terracotta tiles placed on their ends as a way of providing natural ventilation. They are positioned to create a flow of air in and out of the building, responding to wind direction of the area. We noticed how they also become a type of louvre; screening and revealing views and creating light and shade in ancient solid stone walls. This observation lead us to create Mistral”. Edward Barber & Jay Osgerby

Inspiration
Mistral plays with geometry, light and shade. A three dimensional tile, that can be used to build louvred walls or sunscreens that have a sculptural quality. With a single tile multiple configurations are possible. Using Mutina’s extrusion technology Edward Barber and Jay Osgerby have made their own ceramic louvre.

Mistral is a geometric wall component. When used vertically and horizontally, Mistral allows views to be created and controlled. The form permits many combinations of use – it can create a screen, open to light and air or a closed partition that has a sculptural dimension.

Puzzle
“The Puzzle collection is a game with infinite outcomes. The simple geometric shapes become softer and more fluid as the puzzle grows, allowing patterns to ebb and flow. Objects emerge like maps, islands or clouds, with endless possible permutations, meaning that whenever Puzzle is used it will always be unique.” Edward Barber & Jay Osgerby

Inspiration
Puzzle was created by experimenting with simple geometric forms. Edward Barber and Jay Osgerby made a series of physical models, which enabled them to research compositions and develop the exact layout of potential patterns on the tiles. Combining these forms with colour and tone has built a rich and dynamic collection.

As one experiments with the patterns, new combinations emerge creating an ever-expanding collection. Combining this with plain, solid coloured tiles varies the scale of the contrast and creates moment of calm within the composition that has been created. When exploring the formation of patterns, the two designers noticed that these created images like an abstracted map, which in turn inspired the idea of using European islands as a key reference point for the colours of the collection.

There are eight chromatic families in the collection each named after European islands. The neutral colours represent the Northern Isles of Faroe, Gotland, Aland, Anglesey and Skye and the warmer and brighter shades are associated with the Mediterranean Islands of Creta, Milos and Murano. Each of these families includes: a composition of six graphic patterns in three colours, a set of two symmetrical patterns in two colours called Edge, and three solid-colour variations.