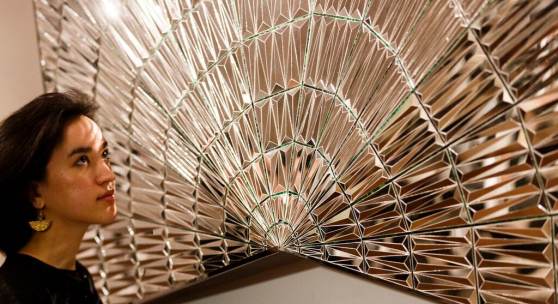 Edward Gibbs, Sotheby’s Middle East & India Chairmen, said: “We welcomed thousands of visitors to our London galleries for our week of sales celebrating the history of Middle Eastern art. To see one sale after another exceed expectations and achieve above-high-estimate results is exceptional in this field - a clear reflection of the strong market demand and the diversity of buyers. Building on last year’s sale series, we saw many more bidders from the MENA region as well as from elsewhere around the world. Participants from as many as 43 countries propelled lots beyond their high estimate and a total of 80% of the lots offered across the sales sold. We are particularly pleased, having recently shared the news of our plans to open an office in Dubai, to have seen such a significant number of clients from the UAE active across the sales, continuing the trend we’ve seen over the last few years.”

The Library of Mohamed and Margaret Makiya:
The single-owner sale of the impressive library of distinguished Iraqi architect Mohamed Saleh Makiya, who died last year aged 101, and his wife Margaret attracted strong bidding to soar more than six times over the pre-sale estimate to bring £2,370,239 (est. £302,000-449,800). The auction revealed a collection of rare books and works on paper that embraces the culture of the Middle East and the wider Islamic world, and its connections with Europe. Led by The Levant, a collection of 15 volumes on Palestine, the Holy Land, Syria and Lebanon, which sold for £425,000 (est. £1,000-2,000).

Richard Fattorini, Sotheby’s Books & Manuscripts specialist, “We were honoured to auction the impressive Library of Mohamed and Margaret Makiya, which resulted in such an extraordinary total. Many of the record prices achieved were due to strong competing bids from clients around the world, and especially from the Middle East, where Dr Makiya was well known as an architect.”

Alchemy: Objects of Desire + 20th Century Art / Middle East:
The first-ever single-owner Modern and Contemporary Iranian sale, the collection of a major Iranian artist and curator, Fereydoun Ave, achieved total of £1,811,693 (est. £1,043,200-1,409,460). Bringing together a treasure-trove of artworks from across continents and cultures, the sale was led by a watercolour by American artist Cy Twombly, alongside standout lots by pre-eminent modernist Iranian artists Charles Hossein Zenderoudi, Monir Farmanfarmaian and Farhad Moshiri.

Sotheby’s relaunched 20th Century Art / Middle East sale brought £2,048,875 (est. £1,040,500-1,439,500) - marking the return of a vibrant and exciting international platform for modern and contemporary arts from North Africa, Turkey, the Middle East and Iran in London. The sale achieved a record for Mahmoud Mokhtar, the first Egyptian sculptor to follow the pharaonic tradition of sculpting, as On the Banks of the Nile sold for £725,000 (est. £120,000-180,000) - an elegant and determined depiction of the struggle for political independence and the emancipation of women in Egypt in the first decades of the 20th-century. The Bull, a unique and striking sculpture by the most renowned post-war Egyptian sculptor Salah Abdel Kerim, sold for more than four times its estimate at a record £173,000. Other world records for artists at auction included Iranian artists Leyly Matine Daftary, Maliheh Afnan and Taher Pour Heidari, Jordanian artist Mona Saudi and Iraqi artist Zeid Saleh.

Ashkan Baghestani, Sotheby’s Contemporary Arab and Iranian Art Specialist and Head of Sale, said: “This week, we broke new ground for the Middle Eastern art market in London. The excitement generated by our exhibition programme carried through into the saleroom, including a landmark result for the great Egyptian Modernist Mahmoud Mokhtar - one of seven new auction records. The triumph of the Alchemy sale – a first for London – was a fitting testament to the discerning eye of a pioneering Iranian artist and collector.”

Arts of the Islamic World:
The Arts of the Islamic World auction presented beautiful rare objects telling the story of over a thousand years of artistic exchange and influence in the Islamic world, bringing an above estimate total of £5,416,625 (est. £3,594,300- 5,131,200). Led by an impressive painting depicting the enthronement of Sultan Osman II in 1618, that sold for £521,000 (est. .£150,000-200,000) - painted by an artist traveling with Baron Hans Mollard von Reinek, the Austrian ambassador at the time, this work represents perhaps the earliest known depiction of an Ottoman courtly ceremony. A rare and exciting discovery, one of only two known Iznik examples in existence, a late 16th-century lavender-ground pottery matara sold for £389,000, nearly eight times its pre-sale estimate.