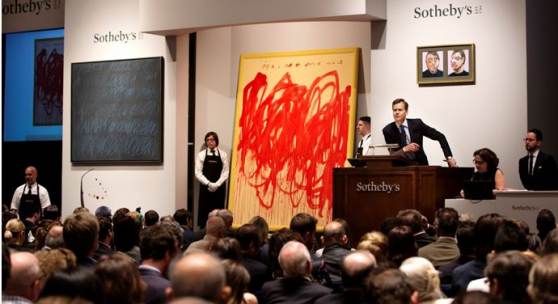 NEW YORK, 11 May 2016 – Grégoire Billault, Head of Sotheby’s Contemporary Art Department in New York: “Tonight we achieved exactly what we set out to do: tailor a sale to the market’s current taste. You only had to count the number of hands in the air for works as diverse as the 2012 Ghenie, Calder from the Barr Collection, and sublime paintings by Sam Francis and Francis Bacon to see that collectors continue to show up when presented with great and rare works of art. The sustained bidding from colleagues in Asia as well as Europe and the US underscored the strength of our team, both new and long-tenured, and their relationships with clients around the globe.”

Cy Twombly’s Untitled (New York City) was the highlight of the sale, selling for $36,650,000:
o Acquired by the consigner months after it was painted, Untitled (New York City) was shown to the public for the first time at our pre-sale exhibitions.
o The present lot is the artist's only Blackboard painting executed in blue wax crayon.
o Also on offer tonight was the artist’s Untitled (Bacchus 1st Version V), which sold for $15,370,000 in the first appearance for the series at auction.

Praised as Francis Bacon's finest self-portrait, Two Studies for a Self-Portrait from 1970 was sought by five bidders before fetching $34,970,000 (est. $22/30 million).
o Purchased from Marlborough Fine Art the year it was completed, the present lot has remained in the same private collection for the last 46 years.
o Was featured on the cover of Milan Kundera and France Borel’s definitive book Francis Bacon: Portraits and Self-Portraits.

Mr. Yusaku Maezawa:
We are delighted to confirm that Mr. Yusaku Maezawa, a Japanese businessman and collector, who also runs a foundation, was the successful purchaser of two lots in tonight's sale: o Adrian Ghenie’s Self Portrait as Vincent Van Gogh from 2012, which soared to a price of $2,590,000, more than eight times the high estimate; and Christopher Wool’s Untitled from 1990, which achieved $13,914,000, making it the top price for the artist this week at any auction house.