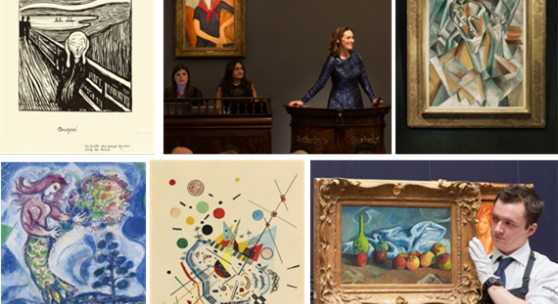 Helena Newman, Auctioneer & Global Co-Head of Sotheby’s Impressionist & Modern Art, said: “Achieving the two highest prices in London in over five years in our sales this week says a great deal about the continued market appetite for Impressionist & Modern Art. There has been much talk about the impact of the referendum on sales this season, but Sotheby’s was honoured to have been entrusted with a very strong selection of works and the sale’s two major highlights, the Picasso and Modigliani, sourced globally and sold globally. Clients from all corners of the globe proved very active, with a broader international spread of buyers this week than our equivalent sale last year, as well as new buyers entering the fray. Our sale results are a clear indicator that collectors continue to compete for great works at every price level when presented with the right opportunities for today’s market.”

Georgina Gold & Marie Edmée de Malherbe, Co-Heads of Sotheby’s Impressionist & Modern Art Day Sale commented: “As was the case with our Evening Sale, the Day Sale was characterised by the freshness of the works offered from private collections and the breadth of international buying – with participants hailing from as many as 50 countries across the sales. Buyers responded with enthusiasm, propelling more than half of the lots sold to prices above their high estimate. Following the outstanding prices seen at the very top of the market in our Evening Sale, our Day Sale demonstrated the depth of the market at each price level.”

Sotheby’s London, 22 June 2016: Sotheby’s series of Impressionist & Modern Art sales this June concluded with an Evening sale total of £103.3 million and a Day sale total of £20 million. Below is an overview of the sales and highlights that drove this week's results.

The greatest Cubist painting to come to the market in decades, the work achieved the highest price for a painting sold in London in over five years. Cubism is considered to be Pablo Picasso’s most important contribution to Modern art and Femme assise comes from the series of canvases that revolutionised Picasso’s working methods and established his path to Cubism. Femme assise was painted in the summer of 1909 and came to the market having remained in a private collection since 1973 when it was acquired at Sotheby’s for £340,000.

One of the greatest portraits the artist painted of his most loyal muse, and the finest to come to the market in a decade, this work was last sold in 1986 for £1.94 million and has now achieved the second-highest price for a painting sold in London in over five years. Painted as a loving tribute, Jeanne Hébuterne (au foulard) reveals a tender moment between a pioneer in the world of modern art and his lover. The painting provides a glimpse into one of the greatest and most tragic love stories in 20th-century art history.

At auction for the first time, this superb, richly inked impression of Munch’s The Scream soared above its estimate of £800,000 - 1,200,000. The expressive and powerful work has transcended art history to reach a global consciousness and his lithograph of 1895 led to the image becoming one of the most iconic subjects in the history of art. This work was originally owned by the Norwegian industrialist and collector Olaf Schou who acquired it directly from the artist around 1900 and had remained in his family collection until now.

Sale Overview:
 Almost two thirds of the works offered had been off the market for over 30 years
 Participation from 29 countries
 Sell-through rate: 88.9%

The top lot of the sale was Marc Chagall’s Sirène au pin which sold for £701,000 / $1,013,576 (est. £300,000-500,000). This work, a gouache, watercolour and pastel on paper from 1960, stands as the quintessential Chagall piece - imbued with a whimsical sense of romantic possibility and glowing with the vivid colours and sensual delights of the South of France.

There was institutional buying in the sale, as Musée d’Orsay acquired Les Danaïdes or Femmes à la source by Paul Sérusier for £233,000 – a rare timeless and enchanting depiction of group of women engaged in solemn procession towards a water- source, harking back to Greek mythology.

Further demonstrating the strength of the market for Works on Paper, the sale offered a large number of sought-after works by artists including Pablo Picasso, Fernand Léger and Edgar Degas. Highlights included Wassily Kandinsky’s An die See und an die Son, which brought an above-estimate £665,000, and Joan Miró’s striking Sans titre that exceeded its estimate to make £569,000.