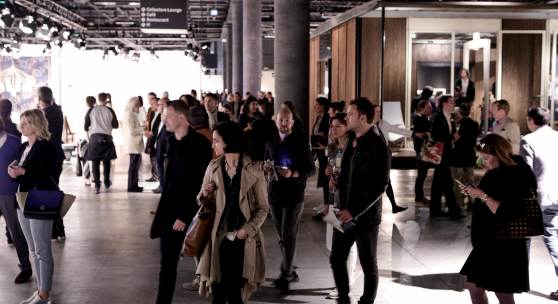 2/ Vernissage/
The Vernissage on Monday, June 13th welcomed guests including collectors and international media who enjoyed champagne and were treated to an exclusive view of this year’s programming before the fair opened to the public on Tuesday.

3/ UNAIDS Gala/
Design Miami/ Basel had the opportunity to host the first ever UNAIDS Gala at the fair this year on Monday, June 13th. The event honored former Secretary-General of the United Nations H.E. Kofi Annan and was hosted by Her Royal Highness Princess Eugenie of York, Caroline Rupert, Kweku Mandela and Ndaba Mandela. Over 300 people enjoyed a sit-down dinner followed by a lively fundraising auction curated and led by Swiss auctioneer Simon de Pury. The evening ended on a high note with a live performance from Duran Duran. The UNAIDS Gala raised over CHF1m towards increasing access to HIV prevention and treatment services for women and children worldwide.

4/ No Longer Creek/
Alexandra Kehayoglou’s No Longer Creek (presented by Artsy) was a popular place for visitors to come and sit and see themselves projected within the Design at Large space at this year’s Design Miami/ Basel/. This year’s Design At Large was curated by Martina Mondadori Sartogo, Founding Editor of Cabana Magazine. Martina and Cabana magazine also served as contributors to create the visually arresting brand identity seen across the fair.

5/ Diego Giacometti Library/
Galerie Jacques Lacoste delighted collector’s by bringing a rare Diego Giacometti piece to Design Miami/ Basel. The decorated corner library, crafted out of bronze and oak features individually sculpted bronze trees and birds along the top of the piece. Commissioned by Marc Berebzat for his Parisian apartment in the late 1960s – the library was certainly the stand out piece of this year’s gallery program.

6/ Maxeville Design Office/
Jean Prouvé was represented in the main gallery program as well as within Design at Large with the incredible demountable Maxeville Design Office. Uncovered by gallerist Patrick Seguin in the French city of Nancy, the office had been repurposed over the years as a swingers club amongst other things, and has now been restored to its former glory.

8/ Nilufar Gallery/
Presenting a space you would like to call home, Milanese gallery Nilufar presented a range of beautiful mid-century and contemporary furniture at Design Miami/ Basel. Francesco Faccin's Serial Planks bronze furniture cast from planks of wood was a standout, with visitors wanting to get an up-close peek of the techniques used in the pieces.

9/ Swarovski Designers of the Future Award Winners/
Long-time Design Miami/ partner Swarovski presented work by the winners of the second Swarovski Designers of the Future Award at Design Miami/ Basel. Dubai based Anjali Srinivasan used her installation to show the beauty and impact of the human gesture, Srinivasan’s installation Unda utilised new touch-sensitive technology and Swarovski Touch Crystal to create a glowing artwork with light following the finger trails of those who interact with the piece. London based sound artist Yuri Suzuki showcased Sharevari, a mechanical crystallophone which provided an interactive demonstration of how the artist chose to explore crystal as an acoustic material.

10/ Collectors Lounge/
In a new partnership for Design Miami/, this year’s Collector’s Lounge was designed in collaboration with Artek. The lounge was designed by Berlin architects Kuehn Malvezzi and featured Artek’s Kiki collection, upholstered in new fabric designs created by Raf Simons for Kvadrat.

11/ Gallery Vivid/
Rotterdam based Gallery Vivid presented a selection of beautiful pieces at this year’s fair. Standout was the Gerrit Thomas Rietveld ZigZag chair (set of 2) that showcased the gallery’s commitment to presenting Dutch design on the world stage.