Edvard Munch’s 'Girls on the Bridge' Sells for $54.5 Million at Sotheby’s NY 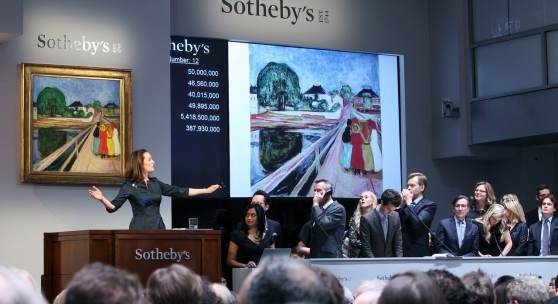 NEW YORK, 14 November 2016 – “Tonight’s solid results, coupled with those in London this June, demonstrate there is strong demand for top-quality works at every price level,” said Simon Shaw, Co-Head of Sotheby’s Worldwide Impressionist & Modern Art Department. “We were pleased to offer for the third time Edvard Munch’s Girls on the Bridge, which achieved $54.5 million – a price that is second only to his iconic The Scream, sold at Sotheby’s for $120 million. Munch has only recently been recognized for his tremendous impact on both 20th and 21st century art, and our team has worked to build his appreciation in the market as well.”

Jeremiah Evarts, Head of Sotheby’s Evening Sales of Impressionist & Modern Art in New York, commented: “It was wonderful to see a conceptual masterpiece by László Moholy-Nagy set a new auction record for the artist. Works by Moholy-Nagy, Kupka and others illustrate the breadth of our category, and are important early influences for later abstract artists – such as those on offer this week in the collection of Steven & Ann Ames.”

-       Tonight’s auction was led by Edvard Munch’s stunning Girls on the Bridge from 1902, which achieved $54.5 million
o   This work has twice set an auction record for the artist at Sotheby’s – first in 1996, when it sold for $7.7 million, and again in 2008, when it sold for $30.8 million
o   Tonight’s result marks the second-highest auction price for any work by Munch, following The Scream, which sold at Sotheby’s New York in 2012 for $119.9 million – a world auction record at the time for any work of art
o   9 of the top 10 auction prices for Munch’s work have been achieved at Sotheby’s

-       Emerging after decades in a private American collection, Pablo Picasso’s large-scale late work Le Peintre et son modèle brought $12.9 million
o   The work has descended through the family of Joan Oestreich Kend since it was acquired by her father in 1968
o   Also on offer from the Kend Collection was Auguste Rodin’s Penseur, petit modèle, which sold to an Asian private collector for $1.8 million – well above its $1 million high estimate. The work also descended through the family since it was acquired in 1968.

-       The evening’s selection of sculpture was led by Pablo Picasso’s Tête de femme, which sold for $8.5 million – above a high estimate of $8 million
o   Strong result for the artist’s sculpture, following the blockbuster show Picasso Sculpture at The Museum of Modern Art in New York
o   The model for the present work is the artist's lover and muse from this period, Françoise Gilot, whose image has come to signify a time of intense happiness for the artist

-       Maurice de Vlaminck’s Fauve landscape Le Verger was another highlight of the evening, selling for $7.6 million
o   Painted in 1906, only a few months after Louis Vauxcelles derided the outrageously-colorful canvases of Vlaminck, Matisse and Braque at the Salon d’Automne as the rantings of ‘wild beasts’

-       The sale featured a number of rare and important abstract works from the early-20th century:
o   5 bidders competed for László Moholy-Nagy’s EM 1 Telephonbild, a masterwork of early conceptual art, which achieved $6.1 million – marking a new auction record for the artist. One of two works on offer tonight that were recently on view at the Solomon R. Guggenheim Museum’s acclaimed retrospective.