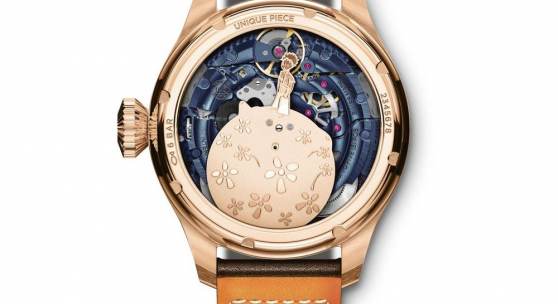 15 November 2016: A unique special-edition IWC Schaffhausen timepiece combining poetry and technology, echoing the extraordinary life of celebrated author and aviator Antoine de Saint-Exupéry, has sold for CHF 48,750 / US$ 48,942 in Geneva today to benefit the Antoine de Saint-Exupéry Youth Foundation. The charitable organization is dedicated to supporting disadvantaged young people and children all over the world through local initiatives.

Handed down through generations, the wonderful tale of the Little Prince written by Antoine de Saint-Exupéry in 1943 has so far been translated into 290 languages and dialects. The Antoine de Saint-Exupéry Youth Foundation aims to reach new heights in the coming years by producing a version of the book in braille, adapting both the text and pictures.

The proceeds from the sale will go towards supporting the launch of the foundation in the United States and to collaborate with local NGOs and associations. The organization will help visually impaired children to discover the Little Prince’s magical world and its enchanting illustrations, via specially conceived educational workshops. There will be an official launch of the programme in 2017, combined with an event in New York.

For Antoine de Saint-Exupéry, poetry and technology, writing and flying were two sides of the same coin; the IWC Pilot’s Watch Annual Calendar Edition “Le Petit Prince” brings these two worlds together. The front side of the watch features a midnight blue dial with annual calendar and red gold luminous hands. The reverse side of the watch reveals an outstanding blue movement – the first ever developed by the manufacturer.

The dial shows the Little Prince gazing in amazement at the sky. He stands on a tiny planet, which forms the rotor and revolves around its axis. Due to the highly complex techniques required to ensure an even blue finish on the movement, followed by the delicate process of assembling the pieces, the movement took IWC nearly 2 years to develop.

The sumptuous blue of the movement creates the impression of depth within the watch, echoing the extraordinary adventures of the little prince.

In addition to its spectacular blue movement, the sleek exterior of the IWC Pilot’s Watch Annual Calendar Edition “Le Petit Prince” hides numerous other features that illustrate the exceptional quality of IWC’s technical workmanship. These include an annual calendar, which shows the month, date and day of the week in three separate windows. Its highly complex mechanism takes into account the differing lengths of different months, with the exception of February; once a year, it requires a simple manual correction using the crown.

This superb piece in 18-carat red gold also includes a 7-day power reserve and a transparent sapphire-glass back.