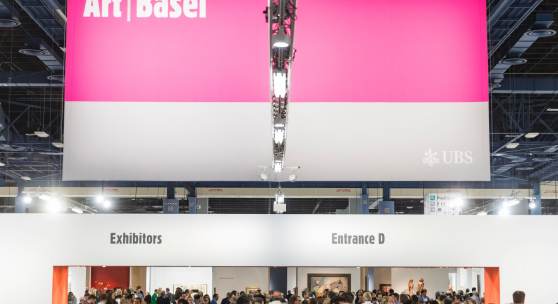 Art Basel in Miami Beach’s 15th edition: a landmark year, featuring strong sales across all sectors of the show This Sunday, December 4, Art Basel’s show in Miami Beach closed amidst high praise from participating galleries reporting healthy sales across all levels of the market. The show, whose Lead Partner is UBS, featured 269 world-class galleries from 29 countries who presented exceptional works, ranging from Modern masterpieces to contemporary paintings, films, sculptures and installations by established and emerging artists. In a challenging socio-political and economic landscape, this edition demonstrated that works of the highest quality presented by leading galleries continue to drive strong demand and solid attendance from serious international collectors. Several galleries chose to present powerful and emotive works that address these issues, which collectors responded to with great interest.

Participating galleries shared their positive experiences and successes at this year’s show: 'The atmosphere of the fair this year has been wonderful and we had a great first day, selling five seminal works in the first hour. We have been extremely pleased in particular with the level of interest we have received from European and American museums.’ Dominique Lévy, Founder and Owner, Dominique Lévy, New York, London

'Art Basel in Miami Beach is by far the best American fair. We had strong sales throughout the week and were particularly delighted to see an exceptional range of collectors from China, South America and Europe. The response to Jonathan Horowitz, who engaged with the political zeitgeist as part of his 'Dear Ivanka’ social media campaign, was extraordinary. Nova and Positions were also exceptionally strong - the younger generation of galleries put a powerful foot forward this year.’ Sadie Coles, Owner, Sadie Coles HQ, London

‘This was an amazing fair for us as we displayed the work of Julio Le Parc in our booth to honor his first US museum retrospective at the Pérez Art Museum. Collectors and representatives from institutions at the fair this year were enamored by our artists so we had a very successful year at Art Basel in Miami Beach.’ Nara Roesler, Owner, Galeria Nara Roesler, Rio de Janeiro, São Paulo, New York

 ‘The steady flow of visitors and the level of serious collectors this year has allowed us to do  very well. We were not overwhelmed with crowds and are very happy to have doubled our  business from last year  Xavier Hufkens, Founder and Owner, Xavier Hufkens, Br

‘We are happy to be in Miami Beach again, and especially pleased with our Sun Xun Kabinett. We’ve met new collectors here and we are particularly glad that Western collectors have shown such great interest in the Chinese works at our booth.’ Lorenz Helbling, Founder, ShanghART, Shanghai, Beijing, Singapore

‘This year’s Art Basel in Miami Beach has been much better than we expected from start to finish and we are really happy with the flurry of sales that we secured – some of which have been to key public collections. The collectors we have talked to have been incredibly knowledgeable, making this year’s Miami Beach show more serious than previous editions in our opinion.’ Johann König, Owner and Founder, König Galerie, Berlin

‘I am happy to report that we sold a painting by Kees van Dongen early in the show. We also placed a Chagall from 1944, which we could have sold several times over, there was so much interest. What is terrific about Art Basel in Miami Beach is that works in the fair range from the early 1900s up until the present day, and this enables collectors to better understand the evolution of artistic movements.’ Howard Shaw, President and Director, Hammer Galleries, New York

‘We were thrilled with our experience at the fair this year. We had very thoughtful engagement with collectors and were pleased with the number of people that took serious interest in our booth. Our sales were very strong and we sold important works. We have been exhibitors at the fair since its beginning and it is always an enjoyable experience to be in Miami, but we felt that the caliber of the exhibitors and visitors was especially high this year.’ John Berggruen, Founder, Berggruen Gallery, San Francisco