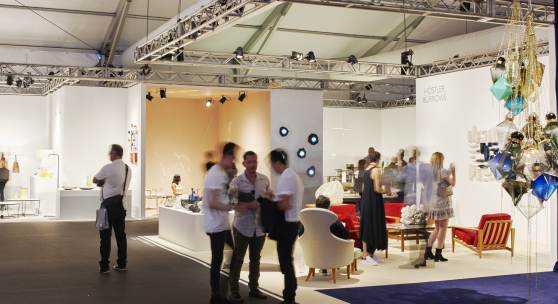 Another highlight was Dean & DeLuca’s Stage, a prototype of a chef-led fast food concept, which took the place as sole café at the fair, nearly doubling anticipated footfall and leaving an impactful impression for its striking design by architect Ole Scheeren. Fair newcomer Compac, the established Spanish luxury surface maker debuted ICE, a collaboration with Paris-based artist and designer Arik Levy. Finally, Airbnb was a lively presence with Sobremesa, designed by Mexico City-based Pedro&Juana, an evolving and collaborative space which featured a daily celebration of the Mexican tradition of sharing time and company, lingering around the table after a meal. Airbnb's installation will also live on following Design Miami/, through a donation of all materials used in the 'Sobremesa' project to design students at Miami’s Design and Architecture Senior High (DASH).

Design Satellites/
For this edition of Design Miami/ many designers, institutions and organizations created programming specific for the fair. Noted for its use of color was the Flamingo Lounge, designed by award-winning Istanbul-based Tabanlıoğlu Architects. The unmistakable illustrations of John Alcorn served as the fair’s identity this year and the basis for a capsule collection in collaboration with Parisian fashion label Maison Kitsuné. The French porcelain maison, Bernardaud, celebrated artist Jeff Koons with his highly acclaimed Balloon Dog reinterpreted in porcelain. CNN Style joined the fair as the official news outlet, with a virtual reality green room in partnership with Google and HTC, using tiltbrush technology for the fair’s many renowned designers, architects and VIPs to paint and create live.

Following this year's fair, the DDG Design Miami Talks Theatre will be donated to The Greater Miami Health Education and Training Center to be used in its clinic, supporting the training of doctors serving the Miami Haitian community as well as leading humanitarian missions in Haiti.

Rosanne Somerson, President, Rhode Island School of Design shared:
"Communities [like Design Miami/] are more important now than ever, as we face giant future challenges. But designers have the ability to imagine the future they want to see and then make it. Seeing the work in the Fair, which included legacy pieces along with pieces that were just conceived, showcased a lineage of excellence that the Fair is fostering."

Design Miami/ partnered with the United Nations on the launch of Building Legacy: Designing for Sustainability. The new platform aims to build momentum and a new movement for green infrastructure - one that will be designed and constructed in a manner that protects people and the planet for future generations. The platform’s participation in Design Miami/ 2016 fostered discussion of building and producing for people’s sustainable futures and brought together designers, architects, developers and producers to promote concrete solutions. Design Miami/ Gallery List