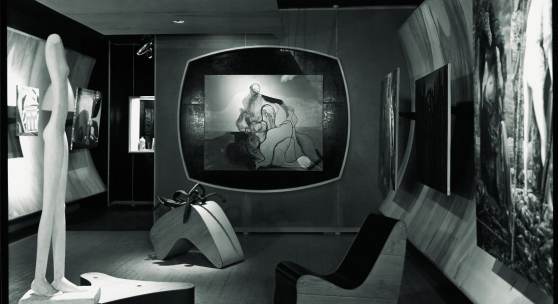 A NEW ACQUISITION FOR THE PEGGY GUGGENHEIM COLLECTION IN VENICE. SIX PHOTOGRAPHS BY BERENICE ABBOTT

The Solomon R Guggenheim Foundation has acquired six, precious black and white vintage prints by American photographer Berenice Abbott (1898-1991), that will enrich the Foundation’s collections at the Peggy Guggenheim Collection in Venice. They consist of images of Peggy’s museum-gallery in New York, Art of This Century, and were taken in 1942. The purchase, from the Keith de Lellis Gallery, New York, was made possible with funds donated by Alberto and Gioietta Vitale, the Guggenheim Circle of the Peggy Guggenheim Collection, Sotheby's, and through prior gifts of the M.R. Taylor Bequest and Asbjorn Lunde, 2016.

On 20 October 1942, Peggy Guggenheim opened her museum-gallery Art of This Century in New York. Designed by the visionary Romanian-Austrian architect Frederick Kiesler, the gallery consisted of various innovative exhibition galleries and became Manhattan’s most stimulating venue for contemporary art. Here Peggy exhibited her collection of Cubist, abstract and Surrealist art and organized temporary exhibitions of leading European artists, and of several then unknown young Americans such as Robert Motherwell, William Baziotes, Mark Rothko, Richard Pousette-Dart, Clyfford Still and Jackson Pollock. The art, its groundbreaking installation and design have become iconic in the history of art installation, while also attesting to Peggy’s pioneering spirit as a gallerist, patron and collector. Such celebrity is largely derived from vivid photographs taken by Berenice Abbott in late October and early November 1942, soon after the gallery’s completion. These shots became synonymous with Art of This Century. The six photographs acquired present various views of the museum-gallery, its Surrealist and Abstract galleries and the Painting Library, with unframed paintings mounted on adjustable arms attached to the concave walls, made of eucalyptus, or sculptures displayed on Kiesler’s ‘Correalist’ furniture. Abbott’s six prints originally belonged to Kiesler, a provenance that enhances their historic value.

Berenice Abbott’s career as a photographer was started by Peggy Guggenheim in the mid 1920s. Peggy wrote in her memoirs: “While I was in Paris Berenice Abbott had asked me to lend her five thousand francs to buy a camera. She said she wanted to start photography on her own. To pay me back [..] she took the most beautiful photographs of Sindbad and Pegeen and me. I certainly was well reimbursed.” The Solomon R. Guggenheim Foundation already owns one of these photo-portraits, courtesy of Ziva Kraus and the Ikona Gallery, Venice. Abbott had joined the studio of Man Ray as an assistant in Paris. She then established herself as an independent photographer, taking portraits of eminent figures such as Max Ernst. She returned to the U.S. in 1929 and remained there for the rest of her life. In the 1940s and 1950s she pursued scientific photography, developing her own equipment and techniques. Her work has been recognized with exhibitions dedicated to her in the Smithsonian Museum (1969), the Museum of Modern Art (1970), and the New York Public Library (1989).