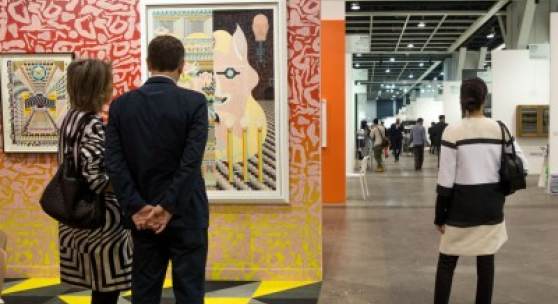 Conversations, Art Basel’s renowned talks series, will commence on Wednesday, March 22. The first of seven conversations, ‘Cities on the Move – 20 Years on’, will commemorate the twentieth anniversary of the iconic namesake exhibition, which was one of the first major shows to investigate the impact of globalization and extreme urbanization. ‘Cities on the Move’ was first curated by Hans Ulrich Obrist and Hou Hanru and presented at Secession in Vienna before it toured to institutions in Bordeaux, New York and London among others. This conversation will feature artists Ellen Pau (b. 1961), Xu Tan (b. 1957), Wong Hoy Cheong (b. 1960) and Anthony Yung, Senior Researcher, Asia Art Archive, Hong Kong. The conversation will be moderated by Hou Hanru, Artistic Director, MAXXI, National Museum of 21st Century Arts, Rome, and Curator 2017 Bi-City Biennale of Urbanism\Architecture, Shenzhen and Hans Ulrich Obrist, Artistic Director, Serpentine Galleries, London. The conversation will be followed by the Premiere Artist Talk featuring Kingsley Ng (b. 1980), who will discuss his project ‘Twenty-Five Minutes Older’ with curator and writer Valerie C. Doran, Hong Kong.

‘Virtual Frontiers | Artists Experimenting with Tilt Brush’ will feature Cao Fei (b. 1978) and Yang Yongliang (b. 1980) in conversation with Freya Murray, Program Manager, Google Arts & Culture, London. Together they will discuss the possibilities of making art in virtual reality and reflect on the impact virtual tools such as Tilt Brush by Google might have on their practice. The Conversation is followed by ‘More Than Outreach | What Makes an Institution Public?’, a discussion between curators and museum directors from the Asia Pacific region and the United States about art institutions’ responsibilities to the public and the public’s role in guiding those institutions. This Conversation will bring together Rhana Devenport, Director, Auckland Art Gallery Toi o Tāmaki, Auckland; Suhanya Raffel, Executive Director, M+, West Kowloon Cultural District, Hong Kong; Michael Govan, CEO and Wallis Annenberg Director, Los Angeles County Museum of Art (LACMA), Los Angeles and Mami Kataoka, Artistic Director, The 21st Biennale of Sydney and Chief Curator, Mori Art Museum, Tokyo; and will be moderated by András Szántó, author and cultural consultant, New York.

Thursday's Conversation will focus on the interdisciplinary artist collective teamLab whose expansive practice involves collaborations in the fields of art, technology and science.

On the final day of the show, artist Keiichi Tanaami (b. 1936) will speak with Mizuki Takahashi, Senior Curator, MILL6 Foundation, Hong Kong about his work that can be found in prominent collections around the world, including The Museum of Modern Art, New York and M+, West Kowloon Cultural District, Hong Kong. From Thursday, March 23 through Saturday, March 25, Art Basel will also present Salon, an open platform for shorter presentations addressing a diverse range of topics. This year’s program will commence with a panel discussion ‘1997/ 2007/ 2017 | Made in Hong Kong’. The discussion will bring together artists Ellen Pau (b. 1961), Leung Chi Wo (b. 1968) and Ho Tzu Nyen (b. 1976), who are all featured in this year's Film program, and will be moderated by Li Zhenhua, Curator of Art Basel’s Film sector in Hong Kong and Founder and Director of Beijing Art Lab, Beijing / Zurich.