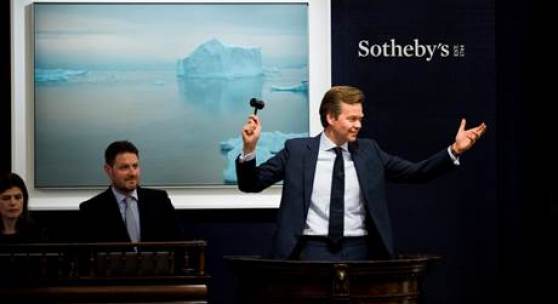 “The past week, across London and beyond, was the first real test of the contemporary market in 2017 and by every measure it has proven itself to be in rude health. All the evidence is there; approaching double the total we achieved this time last year, strong prices across a broad spectrum of artists, and increased activity from every corner of the globe.” - Alex Branczik, Sotheby’s Head of European Contemporary Art.
Sotheby’s London, 8 March 2017: Sotheby’s Evening Auction of Contemporary Art in London this evening exceeded its pre-sale high estimate to total £118,015,150 – an increase of 70% (GBP) / 43% (USD) on the equivalent sale last year.

German art steals the show:
After ten minutes of bidding, Gerhard Richter’s desolately beautiful Eisberg, 1982, sold for £17.7m / $21.6m / €20.4m (est. £8-12 million)
- 5 bidders, including interest from Asia.
- One of only three Iceberg paintings by the artist, this work had remained in the same collection since 1983, the year after it was painted.
Georg Baselitz’s ‘Hero’ painting, Mit Roter Fahne (With Red Flag), 1965 set a new record for the artist when it sold for £7.5m / $9.1m / €8.6m (est. £6.5-8.5 million).
- From the artist’s ground-breaking ‘Heroes’ series, this work cemented Baselitz’s reputation as one of the most provocative and compelling voices of the post-war era
- Exceptional exhibition history, having been displayed in many retrospectives, including the landmark exhibition at the Royal Academy of Arts in London in 2007