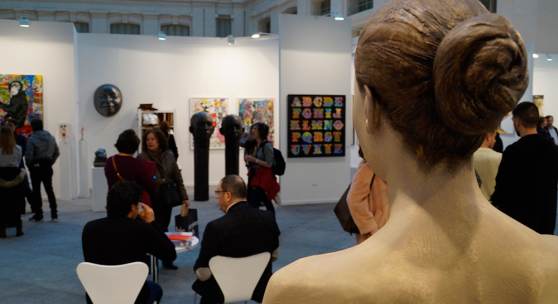 Madrid, Tuesday, March 14, 2017 . Art Madrid Contemporary Art Fair, an essential event in the Madrid Art Week where happens the most innovative proposals and the visit of gallery owners, artists and collectors from all over the world, has closed its twelfth edition as a consolidated cultural event of maximum interest, confirming close to a 40% of new collectors from its last edition.
Among the nearly 20,000 visitors who have passed through the Galería de Cristal of CentroCentro Cibeles between Wednesday 22nd and Sunday 26th, there are ambassadors from all countries present at the fair through their galleries and artists (Germany, Italy, France, Latvia, Portugal, China, Cuba, Costa Rica ...), as well as representatives of local institutions such as Celia Mayer, councilor of the Madrid City Council responsible for the Culture and Sports Area; Paloma Sobrini Sagaseta de Llúrzod, General Director Of Madrid Cultural Heritage and Begoña Torres González, Deputy Director of Promotion of Fine Arts of the Ministry of Culture. The Councilor for Culture of the Generalitat of Catalonia also visited the fair, thus supporting the six Catalan galleries participating.
Art Madrid has highlighted the increase of art professionals, cultural institutions and museums such as those responsible for the CAC Málaga; Isidro Hernández Gutiérrez, commissioner of the TEA (Tenerife Space of the Arts), Francisco Brives Co-director of the Neomudéjar Vanguard Arts Center, and representatives of collections of the Banco Santander Foundation, Thyssen Bornemisza Foundation, Iberdrola Foundation, Casa de Alba Foundation, The Azcona Foundation, the Francisco Sobrino Collection, the SOLO Collection (Madrid) or the ONCE Foundation.
More than 200 national and international accredited journalists have made a full coverage of the fair and its activities and, thanks to Cultura Inquieta, official media-partner of Art Madrid, the event has generated a reach of 3,000,000 users with about 100,000 interactions through social networks.
In relation with the criticism received and the audience, the evaluation of the participating galleries in Art Madrid’17 has been very satisfactory. The directors of the gallery 3 Punts (Barcelona), Javier López and Eduard Duran, have highlighted “a very good influx of public and a very favorable opinion of the collectors with the general proposal of the fair.” The gallery sold, among other pieces, a bronze of Samuel Salcedo titled “Deep Inside” with a price of €29,000. For Nuria Blanco, director of the Moret Art gallery (A Coruña) that participates for the ninth year in Art Madrid, “the fair has consolidated its position within the national panorama becoming an indisputable referent for the Spanish market. In this edition has been a remarkable increase of the presence of international collectors, which represents a qualitative leap compared to previous editions.“ Moret Art sold several pieces by Miguel Piñeiro, Daniel Sueiras and Xurxo Gómez-Chao.
The veteran gallery Kreisler (Madrid) has highlighted the sale of a large format piece by the Salmantine artist Carlos Evangelista, “Línea Quebrada” (oil on wood of 70x180x7 cm), and the repercussion of the pieces by Okuda San Miguel. They sold practically all his works: “They have been private collectors, mostly Spanish, although we have met new clients, mainly Americans,” says Gabriela Correa, director of the gallery. “The presence at the fair is very positive because of the influx of public, an audience that we meet here for the first timeand we invite and accustomed them to visit the gallery afterwards”, she adds.
Elena de las Heras, director of the Hispánica Contemporánea gallery (Madrid-México DF) highlights “the sale of important pieces by Mel Bochner, a sculpture by Rafael Barrios and all the works from Manolo Valdés, including a spectacular composition of 4 assembled engravings of more than two meters” and she emphasizes that “the public of this fair is high quality people, the location is unbeatable and that helps to ensure that the influx of people is always very large, even during the week”.
Among the galleries that participates for the first time, whether in the ONE PROJECT program or in the general program, the experience has been good. Sofía Martínez, from the gallery Léucade (Murcia) has highlighted that “it has been a success in recognition, repercussion and with more sales than we expected with works by Ferrenavarro and Jean Carlos Puerto.” For the gallery Fifty Dots (Barcelona), which participated with a solo-project by the photographer Irene Cruz -who sold several pieces-, “the valuation has been very positive, we have closed many contacts and we have perceived very good criticism about Irene ́s work”, as explains its director Daniel García.
For the gallery Espacio Olvera (Seville), in ONE PROJECT program with the work of the artist Mariajosé Gallardo, “the figures has been really good, covering expenses and taking a good profit margin. Most of the sales have been small format works, with very good price, to people who are starting a collection. But also large paintings sold to clients who already have experience in buying art and they see a safe investment in the acquisition”, says Rubén Fernández Gascón, responsible for the gallery.