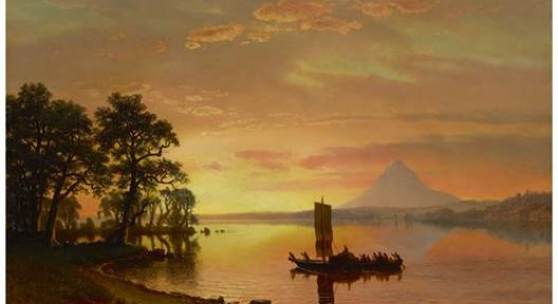 NEW YORK, 14 November 2017 – Yesterday’s auction of American Art achieved $19.4 million, with notable prices fetched by Western and Modern American masters. Spanning over a century of artistic creativity, the sale represented the diversity of works in this category.

Kayla Carlsen, Head of the American Art Department at Sotheby’s New York, noted: “Yesterday’s auction demonstrated that there is strength in American Art across genres. We were delighted to see robust results for a number of lots, from Western to Impressionist, Modern to sculpture, with healthy competition for works fresh to the market and with stellar provenance.”

Cherished by a distinguished American collection for over 40 years since its acquisition in the 1970s, Albert Bierstadt’s majestic Indians Crossing the Columbia River led the sale. A panoramic view of the radiant Columbia River over which Mount Hood looms, the landscape sold for $2,175,000 (estimate $1.5/2.5 million). Landscapes by Frederic Edwin Church, South American Landscape, and by Ernest Leonard Blumenschein, Eagle Nest Lake, sold for $519,000 and $471,000 respectively.

The work of American Impressionists was led by paintings by Frederick Carl Frieseke and Mary Cassatt – both being offered at auction for the first time. Featuring his wife Sadie and a companion in a verdant landscape, Frieseke’s Gray Day on the River sold for $1,695,000 (estimate $1.5/2.5 million). Originally descended in the Cassatt family, and being offered this season from the collection of Elizabeth A. Keck, Mary Cassatt’s beautifully executed and intimate portrait of Master Robert Kelso Cassatt sold for $1,455,000 – more than double its high estimate of $700,000.

Georgia O’Keeffe represented the top modern works in yesterday’s sale. Shell, painted in 1937, embodies the artist’s fascination with the natural world and is exemplary of her mastery of form and color; the painting achieved $1,515,000 (estimate $700/1,000,000). Blue and White Abstraction, in which the subject is reduced to its most essential lines and shapes, sold for $615,000 (estimate $500/700,000). Masterworks by Georgia O’Keeffe continue at Sotheby’s this evening, when Yellow Sweet Peas from the Paul. G. Allen Family Collection will be offered in the Impressionist & Modern Art Evening Sale.

Sculpture also performed strongly against estimate throughout the sale, with Paul Manship’s Diana securing the top spot. Being offered at auction for the first time, four bidders competed for this bronze sculpture of the goddess, depicted with her bow and a bounding hound at her feet, before it sold for $975,000, a new record for this model by the artist (estimate 400/600,000).