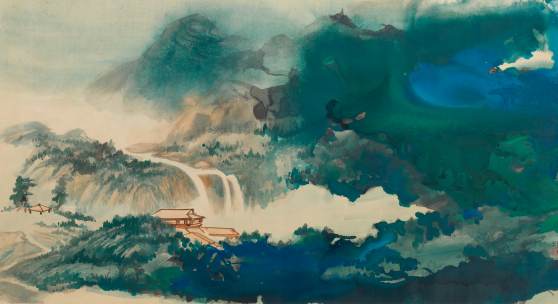 NEW YORK, 23 March 2018 – Eight days of exhibition, five days of sales and ten auctions of Asian art brought Sotheby’s New York a total of $75.6 million, exceeding its pre-sale estimate of $50 million. Works of arts spanning over 3,500 years were sold to collectors in Europe, Asia and the Americas, including 14 lots over a million dollars. Auctions of Asian Art continue in Hong Kong with the Spring 2018 Sale Series opening to the public next week.

Henry Howard-Sneyd, Sotheby’s Chairman of Asian Art, Europe & the Americas, remarked: “We are delighted with the results from this week – one of the best-performing Sotheby’s Asia Week sales series in recent history. Across all ten sales, with one more scheduled for tomorrow morning, we saw vigorous competition for works of art at all levels – approximately half of the works offered achieved above their high estimates, including several, such as the filigree gold ornament  from the Portland Museum of Art and Zhang Daqian’s monumental scroll, achieving multiples of their estimates.”

Christina Prescott-Walker, Divisional Director for Asian Art at Sotheby’s New York, noted: “Since the opening of our exhibition last week, we’ve welcomed over 5,000 visitors to our New York headquarters, filled with over a thousand works of art. From Imperial Chinese porcelain and modern paintings to exquisite Indian miniatures, we were thrilled to find our salesrooms packed with clients, even with a winter snowstorm brewing outside.”

MING: LUMINOUS DAWN OF EMPIRE
Sale Total: $9,394,500
Dedicated to the first century of the Ming Dynasty, the first of the Chinese Works of Art auction at Sotheby’s New York climbed to $9.4 million, above its high estimate. The curated group was led by an Exceptionally Rare and Important Blue and White Ewer, Xuande Mark and Period. Emerging from the Detring / von Hanneken Collection – which has achieved $3.8 million thus far, against a pre-sale estimate of $752,500/1,033,500 – the elegant work of art from the 15th century sold to a private Asian collector for $3,135,000.

JINGYATANG: TREASURES OF CHINESE BUDDHIST SCULPTURE
Sale Total: $3,033,000
The group of masterpieces of Chinese Buddhist sculpture from esteemed Asian private collection Jingyatang was highlighted by a Carved Limestone Head of Avalokiteshvara. From the Sui Dynasty, which lasted from 581 – 618 A.D., the bodhisattva of compassion found significant interest in the salesroom, selling for $843,000, above its pre-sale high estimate.

KANGXI: THE JIE RUI TANG COLLECTION
Sale Total: $4,469,000
Personally selected by collector Jeffrey P. Stamen, 72 pieces of Kangxi porcelain from the Jie Rui Tang Collection sold for $4.5 million, exceeding the pre-sale high estimate of $3.8 million. The group was led by a Large and Important Famille-Verte ‘Investiture of the Gods’ Rouleau Vase from the Qing Dynasty, which established a new auction record for a Rouleau vase of this type; over the course of seven minutes, eight bidders competed for the wucai­-decorated vase, bringing the final price to $1,575,000 (estimate $400/600,000).

THE RICHARD R. & MAGDALENA ERNST COLLECTION OF HIMALAYAN ART
Sale Total: $5,173,875
The top lot of this collection of rare and superb religious paintings spanning six centuries was a Paubha Depicting a Krishna Temple. From Nepal and dated 17th/18th century, the large-scale painting attracted at least four bidders in the room and on the telephone; estimated at $200/300,000, the painting sold to an institution for $567,000.

INDIAN, HIMALAYAN & SOUTHEAST ASIAN ART
Sale Total: $6,911,250
With this final sale on Thursday afternoon, the Indian & Southeast Asian Art department at Sotheby’s celebrated its highest results in over a decade. Their seasonal offerings of Indian, Himalayan & Southeast Asian Art were highlighted by a Large and Rare Bronze Figure of Ekadashamukha Lokeshvara from Tibet, 13th Century. The towering and glistening work of art sold to a private collector for $1,635,000.