DEALERS PROVIDE A MASTERCLASS IN CURATION AT TEFAF MAASTRICHT 2018 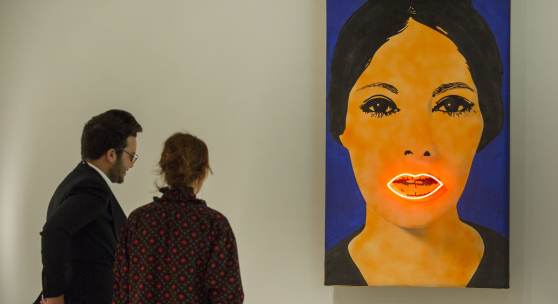 The overwhelming sentiment at the close of TEFAF Maastricht 2018, which ran from the 10th-18th March with Early Access Day on the 8th March and Preview Day on the 9th March, was that the Fair had been a resounding success, with sales reported from every section of the Fair to both private and institutional collectors. The 2018 edition of the Fair welcomed over 100 new museums in addition to the museums that already visit the Fair. The international reputation TEFAF Maastricht has for offering works of extraordinary and unrivalled quality means it continues to be a hub for collectors worldwide. TEFAF Maastricht welcomed around 68,000 visitors during the course of the Fair.

Christian Hemmerle, the youngest and one of the newest Members of the TEFAF Board of Trustees said, “Exhibitors make an enormous effort with their presentation every year but this year the standard of curation and the quality of objects on offer was exceptionally high, which resulted in a consistently buoyant and positive Fair.”

Curated and focused displays throughout the Fair resulted in exceptional results for exhibitors. One such exhibitor in TEFAF Paintings is new participant Lullo · Pampoulides (Stand 368). The young gallery, run by Andreas Pampoulides and Andrea Lullo, sold primarily to new collectors during the Fair, and had to re-hang their stand twice. Sales included The Assumption of Saint Mary Magdalene, by Francesco Albani (1578 – 1660), oil on copper, dated c.1630-1640, which went to a US public institution, and one of the highlights of their stand, Saint Francis Paola, oil on canvas, c.1625-1626, by Simon Vouet (1590-1649), which had an asking price of €250,000. The latter sold on Friday to a private collector and also had serious interest from four museums.

Stoppenbach & Delestre (Stand 333) presented a special exhibition entitled Brittany from the Pont-Aven school to Post-Impressionism, which proved to be extremely appealing to US collectors visiting the Fair. The gallery sold two works from the exhibition to the same private collector from the US – Pont Aven, Sortie de la messe à sept heures, 1923, oil on canvas, by Gustave Loiseu (1865-1935), and La Moisson, c.1890, oil on board, by Émile Bernard (1868-1941).

Jorge Coll and Nicolás Cortés, the directors of Colnaghi (Stand 306) reported 19 sales to date, highlighting strong demand from collectors for Old Master works. The gallery was particularly encouraged by the level of sales to both new and younger buyers. Included within the sales was Portrait Head of an Older Woman, bluish white marble, probably Luna (Carrara), from the Julio – Claudia Period, mid-1st century AD. The work was sold to a private US collection and had an asking price of €700,000.

Commenting on the unique appeal of TEFAF Maastricht, Rupert Maas of The Maas Gallery (Stand 335) commented that “…this is the only Fair in the world that I know, where you see museums come with the desire (curators), decision (directors) and money (patrons and trustees) in one place in order to streamline the acquisition process.”

Moving to TEFAF Modern, one of the highest value works sold at the Fair was Lilacs, 1887, by Dutch master Vincent Van Gogh (1853-1890), oil on canvas, sold by Hammer Galleries (Stand 406). The work, which had an asking price of €9.5 million, was sold to a private collector who was new to the gallery. This was a very exciting sale for the gallery, which this year celebrates its 90th anniversary and its ninth year at TEFAF Maastricht. It is also the third Van Gogh that gallery president, Howard Shaw, has handled during his career.

New exhibitor, Mazzoleni (Stand 500) had a very successful first outing at TEFAF Maastricht with numerous sales reported during the first few days of the fair, including the sale of a 1918 work by Gino Severini (1883 – 1966). Luigi Mazzoleni said that the European audience was particularly strong and guests were extremely well educated and knew what they were looking for.