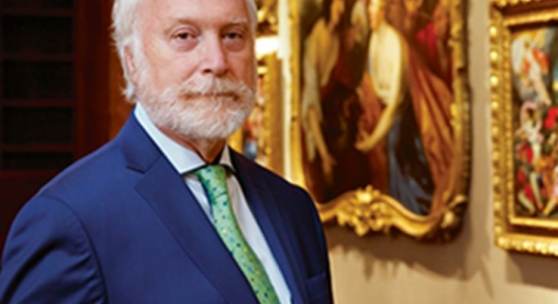 NEW YORK, 5 July 2018 – Sotheby’s is pleased to announce the appointment of Otto Naumann as a Senior Vice President and Client Development Director in its Old Master Paintings Division.

An eminent and widely respected dealer, collector and scholar, Mr. Naumann sold the inventory of his eponymous New York gallery at Sotheby’s earlier this year. When asked at the time what life would hold thereafter, he indicated that though this chapter in career was coming to a close, his passion for the art world – and for Old Masters in particular - was not yet spent. In his new role at Sotheby’s, which he assumes at the end of the summer, he will play a key role across all aspects of the global division – seeking out great works, valuing collections, applying his knowledge and expertise, and helping conceive and execute new and innovative ideas and approaches. He will also continue to dedicate time to his own scholarly pursuits.

George Wachter, Chairman of Sotheby’s America and Co-Chairman of Sotheby’s Old Master Paintings Worldwide, said: “We are thrilled to be able to provide a new home for Otto’s tremendous talents and expertise. Over the course of his long and distinguished career, he has earned an impeccable reputation for his great eye, enormous knowledge, innovative thinking and trust-worthy character. It gives me great pleasure to welcome Otto to our outstanding international team and further accelerate the Company’s growth in the Old Masters market.”

George Gordon, Co-Chairman of Sotheby’s Old Master Paintings Worldwide, said: “Otto’s significant expertise and scholarship in Old Masters and 19th century paintings in all the great European schools of paintings and drawings, combined with his astute understanding of the market will be major assets for our global Old Masters Team. For many years we have enjoyed animated discussions with Otto about attributions, values and other aspects of the art market, and we very much looking forward to continuing this dialogue in his new role as a colleague, as well as a long-standing friend.”

Otto Naumann remarked: “For so many years on the outside looking in, I was always captivated by the power of a great team of specialists supported by a great organization. I am hugely excited by the possibilities and opportunities that come with my new role, and by the prospect of exploring new approaches and ideas with a group of colleagues, many of whom I have worked with in various ways over the years, and all of whom I respect and admire immensely.”

More on Otto Naumann:
Dealing in fine art for over 30 years, Otto Naumann is regarded as one of the most respected figures in the international art scene. A celebrated scholar, earning his master's degree from Columbia University and a doctorate in Art History from Yale, Mr. Naumann is renowned for his exceptional eye for quality and for determining difficult attributions. In 1981, he wrote the authoritative monograph on Frans van Mieris (1635 - 1681) and helped organize the 2005 exhibition on the artist at the Mauritshuis, The Hague and in the National Gallery of Art, Washington. Having made a name for himself specializing in Dutch and Flemish art, Mr. Naumann expanded the breadth of his trade in 2007 to include Italian, French, Spanish and British works as well as 19th century painting. He continues to pursue his academic work, currently working on a book on Rembrandt’s sketches.