Winnie the Pooh Sets Record for Any Book Illustration 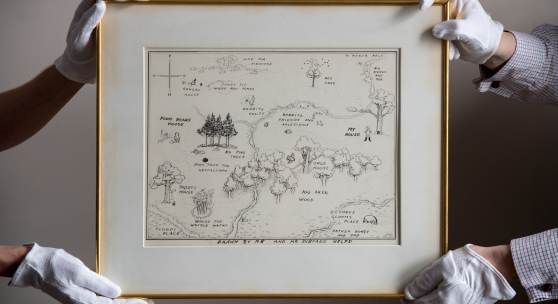 A New Record For Any Book Illustration The Original Map of Winnie-the-Pooh’s Hundred Acre Wood By E.H. Shepard Sells for £430,000 at Sotheby’s London Probably the Most Famous Map in English Literature Unseen for Half a Century

10 July 2018 – Today at Sotheby’s in London a new auction record was sent for any book illustration, when the original map of Winnie-the-Pooh’s Hundred Acre Wood by E.H. Shepard sold for £430,000. Possibly the most famous map in children’s literature, this charming sketch from 1926 was unseen for nearly half a century ahead of the sale. It was offered with an estimate of £100,000-150,000 in Sotheby’s sale of English Literature, History, Science, Children’s Books and Illustrations.

Featuring on the opening end-papers of the original 1926 book, the sketch introduces readers to the delightful imagination of Christopher Robin and his woodland friends. Exactly 40 years later the map played a starring role in the landmark Disney film - Winnie-the-Pooh and the Honey Tree - where it was brought to life as an animation in the film’s opening sequence.

As well as mapping the magical world of Winnie-the-Pooh the sketch also captures the unique personalities of A.A. Milne’s much-loved characters. Eeyore is depicted in his “rather boggy and sad” “gloomy place” with his head hanging sluggishly in the grass, whilst the energetic Roo bounces towards the “sandy pit” where he plays. A solitary Winnie-the-Pooh sits thoughtfully looking out over the wood to his friend, Christopher Robin, who stands with boyish arrogance looking back.

The charming childishness of Christopher Robin is marked by clumsily spelt locations, such as “NICE FOR PICNICKS” and “100 AKER WOOD”, as well as a compass marked with points spelling out the title character’s name. Shepard’s own amusing personality seeps into the illustration, as the map is signed off with the words “Drawn by me and Mr Shepard helpd".

For full information, please click here. The previous record for any book illustration was £314,500, set at Sotheby’s in December 2014 for the original illustration for Poohsticks. More information here.

Today, the map was offered alongside four further original Winnie-the-Pooh illustrations by E.H. Shepard, none of which had been seen for almost 50 years.

Among them was a most poignant illustration showing Christopher Robin and Pooh walking hand-in-hand to ‘an enchanted place on the very top of the Forest’ to say their final goodbye. In the emotional conclusion to his much-loved book – The House at Pooh Corner, A.A. Milne finally signs off with one of the most heart-rending farewells in children’s literature: "…wherever they go, and whatever happens to them on the way, in that enchanted place in the top of the Forest a little boy and his bear will always be playing." Estimated at £70,000-90,000, this drawing more than doubled its estimate to finally sell for £200,000 today. More details are here.

Two additional illustrations taken from Chapter Six of The House at Pooh Corner, showing the characters and a game of ‘Pooh Sticks’, were sold together for a combined total of £112,500. Originally reproduced on pages 95-6 of the published book, the ink drawings record the creation of the game with the first drawing showing Pooh, Piglet, Roo and Rabbit eagerly peering over the Poohsticks bridge, and the second, depicting an unexpected but comic turn of events, with Eeyore floating from beneath the bridge. More details are here.

The fourth, perhaps most familiar image, is a re-drawn version of another illustration from the "Poohsticks" episode which concludes with Christopher Robin, Pooh and Piglet left on the famous bridge by themselves. The tone of the illustration is somewhat different with the excitement of the Poohsticks game changing to a more contemplative mood, with the three friends looking wistfully at the river beneath them, saying nothing. Used twice in the published book, within the chapter and also as the frontispiece, this illustration accompanies a moment of unified friendship and forgiveness, in which Piglet breaks the silence and volunteers his view that "Tigger is all right, really" and Pooh suggesting further that, "Everybody is really... But I don't suppose I'm right...". Offered with an estimate of £60,000-80,000, this too doubled pre-sale expectations to sell for £175,000. More details are here.

Dr. Philip W. Errington Director and Senior Specialist, Department of Printed Books and Manuscripts, Sotheby’s said: ‘I suspect that there isn’t a single child who wouldn’t instantly recognise this wonderful depiction of The Hundred Acre Wood. This is the first drawing you encounter in the book and is the visual guide to the entire world of Winnie-the-Pooh. In this group of original drawings, you can see the real skill of the artist, the skill of the strokes of his pen. They've never been brought out in the UK or the US with illustrations by anyone else apart from EH Shepard and that is the power, and ability of the illustrator, and why this is probably the most famous map in English literature.’