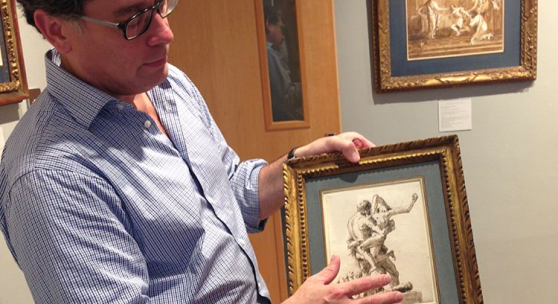 “Very impressive, and a better way than a fair to engage with important collectors and curators” was the feedback from one of the new participants at London Art Week Summer 2018, which ran from 28 June through 6 July at multiple locations across St. James’s and Mayfair. Forty leading UK and international dealers took part and, concurrent with the leading three auction houses’ Old Master sales, mounted specialist exhibitions of works dating from antiquity to the early 21st century, reflecting the diverse tastes of sophisticated connoisseurs searching for the finest works of art available on the market today.

“So many of our exhibitions this summer exemplified the tenacity and patience of dealers with deep knowledge and an experienced eye,” said Crispian Riley-Smith, Founding Director of London Art Week. “LAW dealers carefully foster relationships with owners of important private collections, which enable them to offer many discoveries and works fresh to the market. This approach to sourcing their stock, along with the huge effort put in to themed displays, has drawn the attentions of a wide strata of visitor: the exhibitions have impressed curators from the world’s leading museums as well as scholarly collectors, while first-time buyers have engaged with art genres and periods new to them, and interested members of the public have been eager to discover more about historic works by eminent artists.”

Sales have been reported across the board from more affordably-priced works to the high end, with the majority of immediate gallery sales in the mid-price range. Strong interest has been shown, including by museums, in more important works, which often take some time to conclude, and many dealers have said sales are in the pipeline.

Footfall was for most galleries up on past London Art Weeks. “Nearly everyone has told us they have met serious new customers,” added Riley-Smith, “and talked to representatives of museums as well as major international trade buyers. Being creative with their exhibition themes also makes a strong impact in marketing terms.”

Regular participants commented on how busy they were, and the success of this summer’s event. An important oil sketch, only recently discovered, for Édoaurd-Bernard Debat-Ponsan’s Le Massage – Scène de Hammam (1883) was sold by Bagshawe Fine Art to the Musée des Augustins in Toulouse, France; the museum has been home to the finished painting since 1885. The study, which carried an asking price of 12,000 euros, sold as a result of London Art Week press coverage. Jorge Coll, CEO of Colnaghi and a Board Member of LAW said: “We’re excited that a number of important works have found new homes. [LAW] continues to be the most important and vibrant moment of the year in London for Old Masters."

“There has been a high footfall this year and new people attending,” said Dino Tomasso, a Board Member of London Art Week and Partner at Tomasso Brothers Fine Art, where sales included two major bronzes to private collectors priced in the region of £1,000,000 each. Alex Toscano of Trinity Fine Art and a Board Member of LAW said: “We are very satisfied that London Art Week is now firmly embedded in the London art scene. We’ve had great comments from visitors.” Sales included a portrait by Merry-Joseph Blondel (1781-1853) for a high five-figure sum and two other paintings are on reserve. Crispian Riley-Smith noted that “portraits seem to have sold particularly well, of the finest quality and with well-researched histories behind them.”

Among the ten new participants this summer, Antonacci Lapiccirella Fine Art (Rome) said they were very impressed by their first LAW: “It is a better format than a fair… and an ideal way of getting to know people”, reporting strong interest in all their works, and potential sales are in discussion. Their remarkable discovery of a long-lost painting by Antonio Canova drew a great deal of attention from museum visitors. Tyr Baudouin of Galerie Lowet de Wotrenge (Brussels) had seen “principal international collectors of Flemish art” and had met valuable potential new customers. Caretto & Occhinegro, young dealers from Turin, were thrilled to connect with curators from the Ashmolean Museum and Rubenshuis, and said that LAW was “a great meeting point”. Sales included a religious painting by the 16th century Flemish artist Willem Key for a “high five-figure sum”.

Galleria del Laocoonte new participants (exhibiting with Galleria W. Apolloni) based in Rome and London, met many serious people including museum curators. Among sales was a self-portrait by Arthur Segal (1875-1944), an émigré from Nazi Germany, who in 1937 founded the London ‘Painting School for Professionals and Non-Professionals’ which propounded painting as psychotherapy. The portrait went to a private UK collector. [image available]