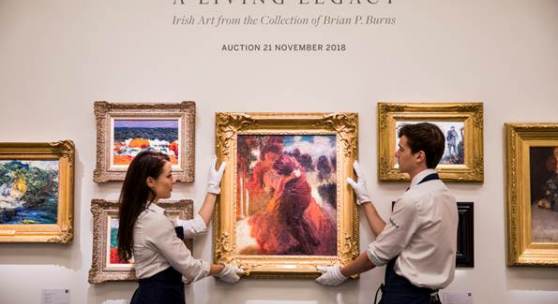 London, 22 November 2018 – Yesterday at Sotheby’s in London, a sale of Irish Art from the Collection of Brian P. Burns brought a total of £3,287,125 / €3,688,827 / $4,204,562. One of the most significant collections of its kind in private hands, this remarkable lifetime achievement has made an invaluable contribution to the appreciation and understanding of Irish art. The result brings Sotheby’s overall total for Irish art sales this season to £6 million / €6.7 million / $7.7 million.

Charlie Minter, Head of Irish Art, Sotheby’s, said: “We were honoured to be entrusted with this once-in-a-lifetime sale of Brian’s wonderful collection. Ever since we unveiled highlights in Boston and Chicago this summer, before moving on to New York, Dublin and now London, the pictures have met with an enthusiastic response. As was Brian’s aim, we are delighted to have been able to celebrate Ireland’s artists and bring their reputation to a wider audience. There was international bidding from new and established collectors, with strong prices for the great names in Irish art, including O’Conor, Yeats, Lavery, Orpen and Osborne, as well as new records for lesser known artists such as James Hore and Lilian Davidson. It was fantastic to see the demand for sculptures by Rowan Gillespie, an artist championed by Brian.”

Sir John Lavery’s Armistice Day, November 11th 1918, Grosvenor Place, London was acquired by Imperial War Museums, selling for £250,000 / €280,551 (est. £200,000-300,000). The work is one of the very few paintings, other than newspaper illustrations, produced at the time of the Armistice celebrations one hundred years ago, when the artist set up his easel at an upstairs window in St George’s Hospital and looked across Hyde Park Corner and down Constitution Hill, capturing the scene before him.