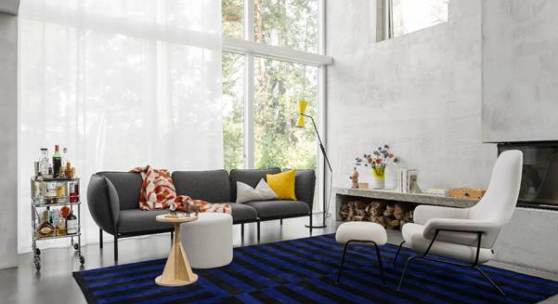 28 November 2018 - Stockholm-based design brand Hem has taken out the first Dezeen Award for furniture design at the award ceremony held in London on 27th November. The Award winning Kumo Sofa was designed by Norwegian studio and sofa-virtuosos Anderssen & Voll. Japanese for cloud, Kumo is a ship-smart modular system based on a single module, meaning that it can be shipped as a single pallet rather than needing a bulky crate or extensive handling. Offering flexibility with an innovative frame and cushion construction, the Kumo can be configured as a 1,2,3,or 4-seater with components that can be easily added, removed or rearranged as your living circumstances change. The Sofa is available in three texture-rich woollen fabrics - Gravel, Porcelain, Mare, and ultra-soft tan leather.

LONDON POP-UP SHOP Hem’s London Pop-Up in the historic Coal Drops Yard is open until the end of the year giving customers in London the opportunity to visit and see the award-winning Kumo first hand. The Pop-Up also features an extensive of Hem furniture, lighting and accessories by some of today’s most forward-thinking designers, including Max Lamb, Luca Nichetto, Pauline Deltour, GamFratesi and Philippe Malouin.
The pop-up’s interior has Hem’s furniture set inside a raw industrial space fitted with bright orange shelving and a large acoustic wall from BAUX. Undoubtedly the star of the store’s interior design is the eye-catching pink counter is bespoke, designed and built by London design studio Soft Baroque using a technique they developed in-house called Puffy Bricks.

PROGRAMMING
Hem has created a programme of talks and workshops held at the Pop-Up for the duration of the opening with interactive events taking place over the next three weeks leading this week with Luca Nichetto and Studio DeFORM.

All workshops and talks are open to the public and available to sign-up to via Eventbrite.