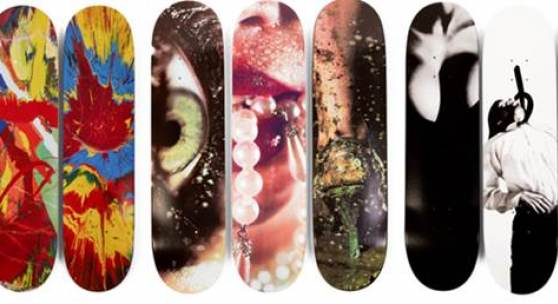 NEW YORK, 25 January 2019 –The only complete archive of Supreme skate decks in private hands sold for $800,000 today at Sotheby’s. Diligently and passionately assembled over decades by collector Ryan Fuller, the archive comprises all 248 decks produced by the iconic streetwear brand over 20 years from 1998 –2018.

Noah Wunsch, Sotheby’s Global Head of e-Commerce, commented: “As the only complete archive of Supreme skate decks in private hands, this collection is of singular rarity and importance. We have been overwhelmed by the response we have received from collectors and fans of Supreme, streetwear, skate culture and contemporary art alike, who came out in droves to view the archive in our galleries, on our website, and across social media. We will continue to present our global clients with a wide spectrum of compelling collecting opportunities through our online-only sales platform.”

Ryan Fuller, Collector, said: “I am extremely pleased with these results and the entire experience of selling my collection. From partnering with StockX for the Inferno exhibition in Los Angeles to visiting New York for the first time to host the launch of the exhibition at Sotheby’s, I was able to meet and work with Supreme fans, collectors, and other amazing people throughout this process. I am very thankful for this experience and hope this is just the first of many more exciting projects to come!”

The archive features two sets that chart Supreme’s relationship with Louis Vuitton – from instigator to collaborator. In 2000, Supreme released an unauthorized set of three Louis Vuitton monogram decks, which were recalled after only two weeks when the luxury brand threatened legal action due to copyright infringement. In 2017, with the rise of streetwear as a major fashion inspiration, the two brands collaborated on the Louis Vuitton x Supreme collection that was introduced in Louis Vuitton’s Fall-Winter 2017 Menswear show. That collection included the Supreme Louis Vuitton Boite Skateboard Trunk – including a deck, tool kit, trucks, wheels, and shoulder strap – that is another highlight of the present archive.

Released in 2002, Supreme produced a set of five decks depicting the central portion of Leonardo da Vinci’s ‘The Last Supper.’ A sixth board with an image of Christ on the deck was exclusively released in Japan.