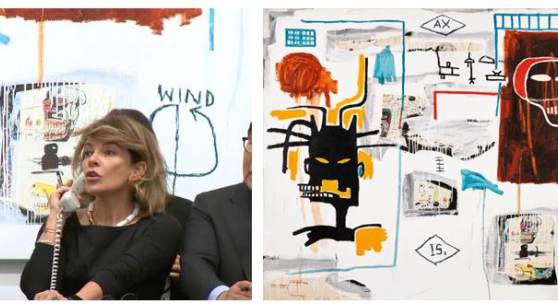 Caroline Lang places the top bid of the week on behalf of a Swiss collector, as Sotheby's London sales of Contemporary Art total £109.3 million

STRONG PARTICIPATION BY SWITZERLAND ACROSS THE EVENING SALE

“I was thrilled to secure this superb work by Jean-Michel Basquiat for a Swiss private collector, winning an intense five-way bidding battle. Tuesday’s evening sale saw participation from all over the world – with 40 countries represented. The depth of bidding during the sales for important fresh-to-the market works is confirmation that the market for Contemporary Art is thriving.” Caroline Lang, Chairman of Sotheby’s Switzerland

AMONG THE HIGHLIGHTS OF THE WEEK:

A further highlight was JENNY SAVILLE’s towering three-metre Juncture (1994), which achieved £5.7 million / $7.5 million / €6.6 million (est. £5,000,000-7,000,000), more than a 1000% increase on the £457,250 the painting achieved in its last appearance at auction in 2009. Altogether 13 works by female artists were offered in last night’s sale, with over half exceeding their pre-sale high estimate. New artist records were set for Turner Prize nominee REBECCA WARREN, and Nigerian artist TOYIN OJIH ODUTOLA, who also made her auction debut.

Full information is included in the attached press release, and high resolution images are available to download here.

The sale was led by KEITH HARING’s electric Untitled from 1983, which was snapped up for an above estimate £975,000 / $1.3 million / €1.1 million (est. £400,000-600,000). Boldly rendered in the artist’s universal visual language, the work embodies and celebrates a vivacious moment of converging social stratospheres in the vibrant zeitgeist of New York in the early eighties – an epitome of Haring’s unique ability to convey feeling and emotion through forms distilled to their most basic, essential components.

This week’s sales follow stellar results for our Contemporary Curated sale in New York last week, which achieved $36.8 million – the highest ever total for the Sotheby’s series. Sotheby’s next sales of Contemporary Art will be held in Hong Kong on 31 March and 1 April.