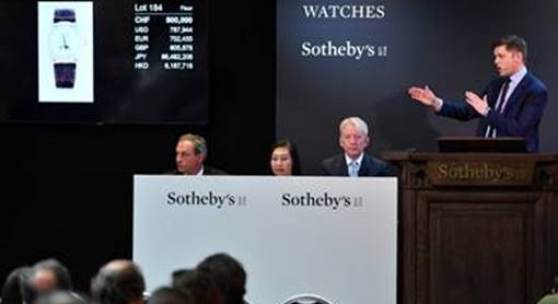 THE “IMPORTANT WATCHES” SALE
Totals CHF/$ 9 million
Geneva, 12 May 2019 – Vintage icons have won the day at Sotheby’s Geneva, with two 1950s showstoppers by Patek Philippe taking centre stage and Rolex Daytonas from the 1970s confirming their star status. The sale was led by a superb example of the highly sought-after Patek Philippe reference 2497, featuring a rare case made by Emile Vichet which realised CHF 980,000 / $979,775, a record for this reference in pink gold.

Speaking after the sale, Sam Hines, Global Head of Sotheby’s Watches, commented: “There are golden eras and golden models for vintage watches and today’s sale offered plenty of scope for collectors, from two of Patek Philippe’s iconic references from the 1950s (2497 and 1518) to the first generation of Rolex Daytonas. As we celebrate today’s results, we also look forward to an exciting series of sales in the months ahead, shining light on other vibrant areas of the market. This summer we will reach for the stars, with the first chapter of ‘Masterworks of Time’ in London, led by George Daniels’ legendary ‘Space Traveller I’ and our Omega Speedmaster sale in New York, commemorating the first Moon Landing, in addition to our June Important Watches sale.”

Patek Philippe prevailed today at Sotheby’s Geneva, with a group of timepieces by the prestigious Geneva manufacture soaring to CHF/$ 3.4 million (est. CHF 2.3-4m/$2.3-4m). Covering over 130 years of history of Patek Philippe, with pieces from the late 19th century to today, the selection was spearheaded by two Patek Philippes from the 1950s.

The Rolex Daytona’s star is still very much in the ascendancy. Four of the top prices in today’s sale were achieved by models from the 1970s and 1980s, including: