A $900+ Million Week of Auctions at Sotheby’s Worldwide 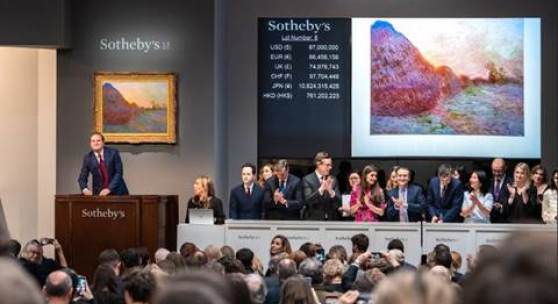 SERIES LED BY
*THE MOST VALUABLE WORK SOLD AT AUCTION TO-DATE IN 2019*
Claude Monet’s Meules Achieves a Record-Breaking $110.7 Million
Marking a World Auction Record for Monet
&
The First Work of Impressionist Art to Exceed $100 Million at Auction

Half of All Sold Lots Exceed Their High Estimates

10 EVENING SALE WORKS ACQUIRED BY COLLECTORS ACROSS ASIA
Including Picasso’s Mousquetaire à la pipe ($20.8 Million),
Which Will Enter the Collection of a Private Asian Museum

Led by:
FRANCIS BACON’S STUDY FOR A HEAD SELLS FOR $50.4 MILLION
An Outstanding Example of the Artist’s Iconic ‘Screaming Popes’
&
MARK ROTHKO’S UNTITLED, 1960 SELLS FOR $50.1 MILLION
Offered on Behalf of the San Francisco Museum of Modern Art
To Benefit the Institution’s Acquisitions Fund

A NEW BENCHMARK FOR AN ART DECO NECKLACE
“The Beaumont Necklace” Fetches $3.6 million ǀ More than Double Its 1994 Auction Price

A Fabergé Diamond Tiara Made for the Last Crown Princess of Prussia
Sells for $434,000

20 MAY 2019 – Tad Smith, Sotheby’s CEO, commented: “It was an incredibly exciting and successful week at Sotheby’s worldwide, which saw a number of record-breaking sales delivered on behalf of our clients, including the highlight of the spring auctions: the showstopping Monet Haystacks. We were pleased to welcome 15,000 visitors into our reimagined and expanded New York galleries, and inaugurate a spectacular series of spaces to celebrate outstanding works of art as well as the legacies of many of the world’s great collectors. We closed the week with an exceptional total of more than $919 million sales across our global auctions, demonstrating the strength and consistency of the market at every level.”

About Sotheby’s
Sotheby’s has been uniting collectors with world-class works of art since 1744. Sotheby’s became the first international auction house when it expanded from London to New York (1955), the first to conduct sales in Hong Kong (1973), India (1992) and France (2001), and the first international fine art auction house in China (2012). Today, Sotheby’s presents auctions in 10 different salesrooms, including New York, London, Hong Kong and Paris, and Sotheby’s BidNow program allows visitors to view all auctions live online and place bids from anywhere in the world. Sotheby’s offers collectors the resources of Sotheby’s Financial Services, the world’s only full-service art financing company, as well as the collection, artist, estate & foundation advisory services of its subsidiary, Art Agency, Partners. Sotheby’s presents private sale opportunities in more than 70 categories, including S|2, the gallery arm of Sotheby's Global Fine Art Division, and three retail businesses: Sotheby’s Wine, Sotheby’s Diamonds, and Sotheby’s Home, the online marketplace for interior design. Sotheby’s has a global network of 80 offices in 40 countries and is the oldest company listed on the New York Stock Exchange (BID).


From Monet to KAWS: A $900+ Million Week of Auctions at Sotheby’s Worldwide
Sotheby’s Auktionshaus