IMMERSIVE INSTALLATION BY STUDIO INI TO DEBUT AT A/D/O 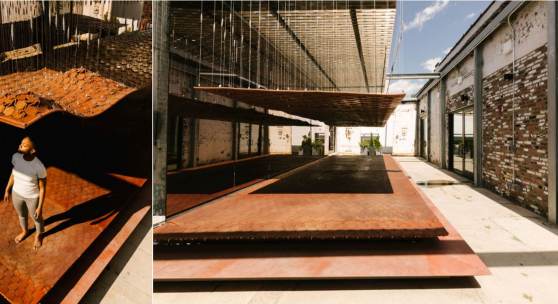 Urban Imprint reconstructs the fabric of our urban environment and imagines the city as a megaphone to the self.

A/D/O by MINI, the creative space in Greenpoint, Brooklyn, is pleased to announce Urban Imprint, a site-specific, new, immersive, outdoor installation by Studio INI. The installation will open to the public on May 17, 2019 during NYCxDesign, New York City’s annual celebration of Design taking place May 10– 22, 2019. Studio INI is founded by Nassia Inglessis, a designer and engineer based in London and Athens. Her collaboration with A/D/O follows DISOBEDIENCE (ΑΝΥΠΑΚΟΗ), the highly-acclaimed kinetic installation shown at the 2018 London Design Biennale.

The debut of Urban Imprint marks A/D/O’s second presentation during NYCxDesign. Following the success of 2018’s interactive exhibition, Spirit of the City, designed by United Visual Artists (UVA), Studio INI’s installation demonstrates A/D/O and MINI’s long-term investment in exploring the future of design in the context of city life and urban landscapes.

Urban Imprint has been designed for the outdoor courtyard at A/D/O with Studio INI taking a forward- looking approach to notions of personal identity in cities. The installation will reimagine the relationship between people and their built environment, allowing visitors to reshape their physical space and architecture as a result of their own movement. The boundaries of the immersive, cocoon-like envelopment will rise, recede, and partially separate as people walk through the piece to give each individual a unique and intensely personal experience.

“In cities, we are so often adapting to the physical constraints of a predefined plan, as if poured into a vessel of concrete and glass” explains Inglessis, “I wanted to explore what it would look like to create a more symbiotic and ‘natural’ relationship between us and our built environment. In nature, the human self is both part of an ecosystem and an architect of the constructed space; a space that takes form as a result of the imprint from all the living organisms that inhabit it. The goal of Urban Imprint,” Inglessis continues, “is to explore the potential of a highly responsive urban space; one that I hope can allow its visitors to feel present and empowered through their own unique imprint.”

Urban Imprint continues Studio INI’s practice of using digital tools and techniques to embed, rather than overlay, new capabilities into traditional and cutting-edge materials. In addition to DISOBEDIENCE (ΑΝΥΠΑΚΟΗ), a 17-meter wall that flexed and morphed around the human body, Studio INI counts among its recent work In Need of Transformation, exhibited at the Victoria & Albert Museum (V&A) in London in 2017 and Kochi- Muziris Biennale in 2018. The project converges automation with craft in glassblowing and digital pneumatics, seeking to extend the capacity of glass to transform itself and the space it inhabits through light. Spine, created for the London Design Festival 2015, included two monumental light structures suspended in the Stamp Staircase of London’s Somerset House in which Inglessis invited the public to experience an exaggerated manifestation of the role of electricity in their own bodies. In her research at the MIT Media Lab in collaboration with Neri Oxman, Nassia Inglessis joined the Mediated Matter Group in Glass II, an architectural installation using 3D printed glass that hosted during Milan Design Week 2017 at the Triennale di Milano and Fiberbots, a swarm of robots that can autonomously build fiber-composite architecture.

“MINI is focused on the future of how we live in cities – a mission that really comes to life with the programming and exhibitions at A/D/O,” says Esther Bahne, VP of Strategy and Innovation, MINI. “Urban Imprint engages with all of the senses and explores ways to make our physical environment more dynamic. It shows that design, when combined with thoughtfully integrated technology, can transform the architecture of urban living and our role within it.”

“We are thrilled to be working with Studio INI and giving the work of Nassia Inglessis a platform during New York’s most important design week,” says Nate Pinsley, Global Managing Director, A/D/O. “Her vision is one that uses technology as a tool to enhance our humanity. Our programming has always aimed to inspire debate about the future of design and we could not imagine a more perfect partner.”

"Following last years' success of ‘Spirit of the City’ with United Visual Artists, the stakes were high to identify our next design week collaborator," says Anne-Laure Pingreoun, Global Lead Creator, A/D/O. "We strived to find someone who could create an installation that was visually captivating while also intellectually engaging. Studio INI and Nassia were a natural fit and Urban Imprint is a perfect mix of creativity and substance while fulfilling A/D/O's mission to explore the future of design." #futureofdesign #urbanimprint #INIxADO #MINI

ABOUT STUDIO INI
Nassia Inglessis founded Studio INI in 2015 to challenge pre-existing ideas about the way we behave and interact with the physical and built environment that we design. Inglessis and her team take a human- centric approach to the material world, applying digital tools and new technologies to it. But rather than creating a virtual or augmented reality, the studio is pioneering what Inglessis calls an “augmented materiality”: ways to bring the material world closer to human interaction and intention.