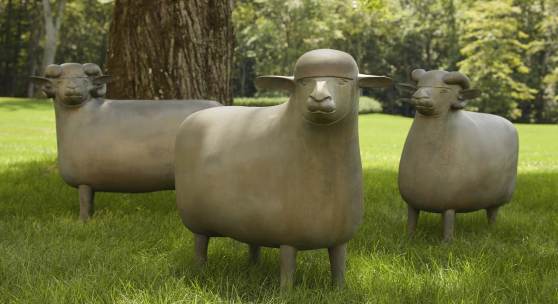 NEW YORK, 28 May 2019 – Sotheby’s New York auctions of 20th Century Design concluded last Thursday with an impressive total of $20.3 million. The sales series saw the highest-ever total for a various-owner Design auction at Sotheby’s worldwide, and were a strong 82% sold overall. Below is a look at the important pieces that drove last week’s sales in New York:

An unprecedented offering of sculptures by François-Xavier and Claude Lalanne were led by Three "Grands Moutons de Peter", which bested their $1.8 million to sell for $2.4 million. Marking the first time and only time that works from this series have appeared at auction, the trio of sheep – comprising two rams and one ewe – were inspired by famed architect, Peter Marino – a close friend of the legendary duo, who encouraged François-Xavier to execute a new sheep series: an original variant made entirely of gilt bronze, inspired by the story of “Jason and the Golden Fleece” from Greek mythology.

In addition, “Singe Avisé (Grand)”, a rare and monumental bronze monkey circa 2005 topped its $1.5 high estimate, achieving $2.2 million. Number six from an edition of eight, Lalanne’s “avise”, or “insightful”, monkey encapsulates the artist’s life-long fascination with the zoological world, and is a nod to the time that the artist spent observing the Egyptian and Assyrian art galleries at the Louvre, where he once worked as a guard. Further highlights by Les Lalanne included a group of six stone-and-bronze sheep that together achieved $1.2 million (estimate $680,000/1 million); while Claude Lalanne’s stunning “Gingko” Dining Suite doubled its $300,000 high estimate to bring $680,000.

An iconic symbol of postmodern design, Marc Newson’s Pod of Drawers sold for $1 million (estimate $700,000/1 million). Created in 1987, the dynamic and sculptural work was inspired by Andre Groult’s Chiffonnier Anthropomorphe from 1925 and offers a modern take on the traditional chest of drawers: riveted aluminum replaces sharkskin on the exterior, while three bulbous, rubberized feet support the pod. These characteristics were borrowed from Newson’s well-known LC1 lounge, which foreshadowed the designer’s celebrated Lockheed lounge. Underscoring the demand for works by Newson, the artist’s "Orgone” Stretch Lounge from 1993 realized $614,000.

Outstanding examples of American Studio design were led by Paul Evans’ “Sculpture Front” Sideboard, which established a new world auction record for the designer when it sold for $536,000 – nearly three times the $180,000 high estimate. Created circa 1967, the sideboard is a quintessential example of Evans’ designs, which incorporate sculpted metal in his idiosyncratic style. Sotheby’s now holds three of the top five auction prices for works by Evans.

Further highlights from the American Studio chapter included Harry Bertoia’s Untitled (Dandelion) sculpture circa 1963, which fetched $412,500 against a high estimate of $300,000. Just one lot prior, Untitled (Sunflower) from 1956 achieved $287,000. In the 1950s, Bertoia developed his first radical examples of wire sculptures, often referred to as Sunflowers and Dandelions. Bursting with dynamism and energy, these two dazzling works are among Bertoia’s most exuberant creations and offer unique insight into the artist’s exploration of this beloved form.

In addition, Wendell Castle’s Important "Vermillion" Desk and Chair from 1965 brought $275,000. Sculptural and elegant, the works were created five years after Castle visited the 1960 Art Nouveau exhibition at the Museum of Modern Art, which presented the movement as a precursor to Modernism and had a profound effect on his creative approach. In particular, the desk exhibits Castle's famed stack lamination technique and encapsulates the spirit of the Art Nouveau movement.