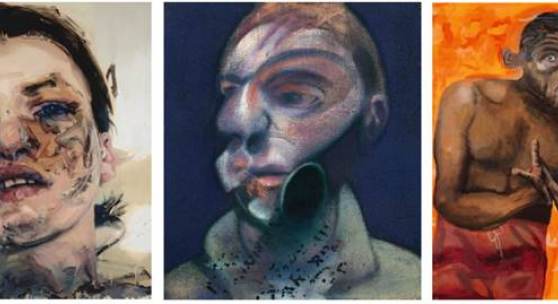 18 June 2019, London: Three outstanding portraits by Jenny Saville, Francis Bacon and Albert Oehlen will lead Sotheby’s Contemporary Art Evening Auction this month. Psychologically charged, with a powerful awareness of flesh and mortality, each work is born from a gruelling period of contemplation and introspection. The exhibition will run in London from June 22 ahead of the evening auction on June 26 (6-7 St George Street W1S 2FE).

The Head of Sotheby’s Contemporary Art Evening Auction, Emma Baker, explains: ‘Portraits are set to steal the show this season, led by an exquisite example of scrutinous self-portrayal by one of the greatest painters of the 20th century. Motivated by the death of his former lover George Dyer, Bacon’s self-portrait is overwhelming in depth, colour, and intensity - a stunning manifestation of the artist’s psyche in the years following the loss of Dyer. It will appear alongside a similarly bereaved self-portrait of an empty-handed Oehlen, created after the death of his lifelong friend and partner in crime Martin Kippenberger, and a stunning vision of an anonymous sitter by Jenny Saville which is at once violent, distraught, and resolute. In each of these works, every layer of paint offers a new depth of emotion, conceptual innovation and painterly skill’.

With over 70% of lots appearing at auction for the first time, the sale will offer fresh to the market works from across the globe – from international sellers spanning Greece, Belgium, France, Nigeria, Japan, and the USA.

A deeply intimate portrait rendered on a monumental scale, Jenny Saville’s Shadow Head is a remarkable example of the fleshy, sculptural portraiture which has propelled her to the forefront of the Contemporary art market and which, in October 2018, saw Propped achieve a new auction record for a work by a living female artist when it sold in Sotheby’s Contemporary Art Evening Auction for £9.5m.

At once fragile, violent and psychologically charged, Saville’s anonymous sitter is rendered with photographic reality amidst a frenzy of fluid brushstrokes. A second look reveals streaks of luminescent light evoking a brilliant digital glow, speaking to the modern age of digital reproduction and ‘selfie’ culture. In this painting, Saville continues to question the perception of the female body, the flesh and the self. Executed over six years, Shadow Head is a palimpsest of paint which mirrors the textured and layered quality of the flesh, and carries forth the same sculptural nature and immense scale of earlier works such as Propped.

Measuring 14 by 12 inches, Bacon’s favoured scale for portrait studies, this evocative self-portrait hails from the very height of the artist’s career, in the years following the success of his celebrated retrospective at the Grand Palais in 1971. Rendered against a backdrop of thick, midnight blue paint, this is the only small self-portrait to be overlaid with fragments of illegible Letraset – in this painting transferred words spill from his mouth but communicate nothing.

Considered the most introspective and inwardly scrutinous period of Bacon’s turbulent life, his output of the 1970s offers a modern-day allegory for melancholia, defined by the sudden death of his former lover George Dyer. Bacon never truly relinquished the guilt and responsibility he felt for Dyer’s death, but the present work suggests a growing resolution as he emerged from the pain of mourning that had deeply afflicted his work over the previous four years. The artist’s features are here rendered with an exuberant chromatic palette and appear resolved; a confident artist operating at the very height of his creative faculties. Read more here.

Selbstportrait mit Leeren Händen was created one year after the death of Albert Oehlen’s friend and collaborator Martin Kippenberger who died from liver cancer at the young age of 44. The rebellious German duo from the post-war punk era had been friends, drinking partners, band-mates and co-painters for two decades. Oehlen paints himself in gigantean size as bereft, wide eyed and literally empty-handed, stripped of the artistic relationship that had so characterised the first part of his career.

From the prestigious collection of Harald Falckenberg, this work will make its auction debut having remained in his collection since 1999, the year after it was painted. A seminal monochrome Joke Painting by Richard Prince will also be offered from this collection.

The sale follows hot on the heels of the new auction record established for Oehlen in October 2018 at £3.6 million / $4.7 million. And now, this self-portrait could set a new benchmark when it is offered with an estimate of £4-6 million.