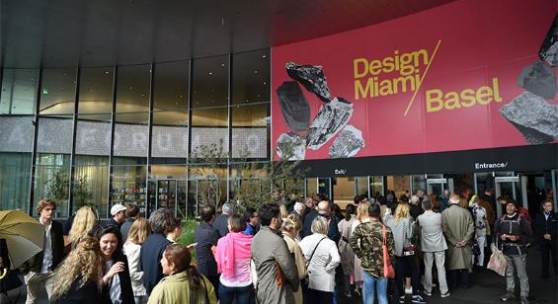 Basel, June 20, 2019
Design Miami/ Basel concluded its fourteenth edition last week with forty-five gallery presentations, fourteen Curios, and collectible furniture and decorative art spanning more than 1,700 years of design history. Some of the finest craftsmanship ever realized was available at the fair, dating from pre-Columbian textiles of 300 AD to debut works developed specifically for exhibition at the fair.

Frank Lasry of MCH Group (Parent Company of Design Miami/) said, “Design Miami/ continues to be the most premium platform for historic furniture and decorative art, while offering some of the most exciting new material from the world’s leading galleries. As we conclude the fourteenth edition of the fair, it is a pleasure to see the Basel edition continuously gain strength."

Jennifer Roberts, Chief Executive Officer, Design Miami/, said, “Our fourteenth edition was a tremendous success thanks to the strong exhibitions brought by our gallerists and Curio program. We were pleased to include A Plastic Planet in an important dialogue with Aric Chen’s debut exhibition, Elements: Earth. We are proud that Design Miami/ is ushering in a generation of designers who follow the greats of the twentieth century and bring with them a following of engaged and influential collectors.”

Aric Chen, Curatorial Director, Design Miami/, said, of his first fair in the position, “I have admired Design Miami/ Basel since its beginnings and to have contributed to it this year has been an honor. It is a meaningful platform, with an engaged audience, for having dialogues about many pressing topics around design and its future."

This year’s fair demonstrated that it is often the challenges faced by society that produce the most influential art and design. During the Design Miami/ Basel Talks program, Serpentine Galleries Artistic Director Hans Ulrich Obrist said, of the environmental crisis, “We live in a situation of urgency . . . and that means that there is no time to lose. We now basically need to break down the silos and find ways to bring art into society. That is not only about the exhibitions, but about how we can produce reality.”

Gallery Program/
Movements and common narratives found throughout the gallery program emerged with confidence this edition, showing forms, functionality, and social messages shared across galleries, designers, and territories. Fine Japanese-inspired decoration in porcelain and sterling at Oscar Humphries’ Curio Japonism were met with important historic Japanese woven baskets at the gallery of first-time exhibitor Erik Thomsen. Equally historic bamboo vessels by master weavers made an impression with collectors at LAFFANOUR–Galerie Downtown, where the intricate ikebana vases were juxtaposed with postwar French design from masters Charlotte Perriand and Jean Prouvé.

Of note for their rarity this year were works by Jean Royère on show at both Galerie Jacques Lacoste and Galerie Chastel-Maréchal. Both galleries debuted and sold previously unseen works discovered in the homes of original collectors, commissioned in the mid-1950s. A set of four bar stools and an undulating sofa in yellow velvet at Galerie Chastel-Maréchal made stark contrast to the gallery’s one-of-a-kind Jose Zanine Caldas sofa fashioned from a reclaimed abandoned wooden canoe, which was discovered outside Rio de Janeiro in 1976 and shown for the first time at Design Miami/ Basel. Examples of collectible upcycling emerged elsewhere on the gallery floor, however, with reused plastics, fishing line, coconut fibers, and hosiery making fine examples of the planet’s material future.

Discoveries were available not only in the contemporary program, however, with historic works by lesser-known and equally influential designers of the mid-twentieth century at galleries like New York’s Demisch Danant. The gallery’s cofounder, Suzanne Demisch, one of Design Miami/’s founding exhibitors, said, of such works, “The most important design of the twentieth century finds its collectors in Basel, but the most rare and influential pieces are often from the great designers whose names are lesser known. The postwar generation of French designers, influenced by their UAM mentors and challenged by postwar society, for example, proposed a new modern lifestyle that propelled French modernity into the 1960s. Those works can be seen as triumphs in mid-century design today.”

Notable Sales/
Shortly following the death of the great designer and sculptor Claude Lalanne on April 11, 2019, Galerie Mitterrand of Paris sold nearly its entire exhibition of the late artist, with sales totaling more than $1 million. Erik Thomsen Gallery of New York sold sixteen rare Japanese woven bamboo baskets that ranged in price from $5,000 to $85,000, the first of their kind at Design Miami/ Basel. Paris’s Galerie Jacques Lacoste sold much of its exhibition of Jean Royère and Charlotte Perriand, including a lamp, mirror, console table, two chairs, coffee table, and custom Royère wall paneling in the first two hours of the Collectors Preview. Oscar Humpries sold the entire collection of fourteen porcelain works by Christopher Dresser, ranging from $3,700 to $7,500. Functional Art Gallery, a first-time exhibitor, sold two pieces to major institutions.