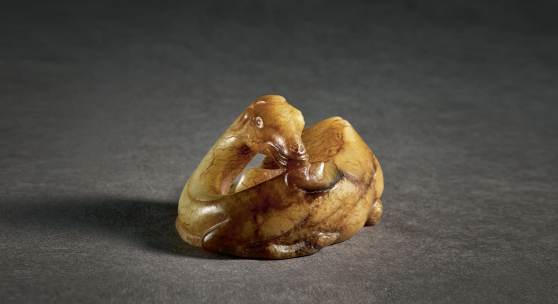 Chinese Works of Art Originally Gifted by Florence & Herbert Irving
To The Metropolitan Museum of Art in New York
Soar to $8.3 Million
– Double the Auction’s High Estimate –
**
Led by a Massive Spinach-Green Jade ‘Dragon’ Washer from the Qing Dynasty
Sold for $1.3 Million
– More than Eight Times Its High Estimate –

An Exceptional and Rare Beige and Brown Jade Camel
Sold for $620,000,
Leading the $4.6 Million Auction of Works from
The Renowned Collection of Stephen Junkunc III

A Gilt-Bronze Figure of Avalokiteshvara Padmapani
Leads a Selection of Chinese Buddhist Art,
Selling for $620,000

NEW YORK, 10 September 2019 – Today in New York, Sotheby's opened its September Asia Week sales series with three dedicated auctions that together totaled an exceptional $16.4 million, outpacing their overall high estimate of $12.4 million. Led by the sale of Chinese Art from the Metropolitan Museum of Art: The Florence and Herbert Irving Gift that more than doubled expectations, a strong 81.6% of lots offered today were sold, driven in large part by competition by bidders from around the world.

Angela McAteer, Sotheby’s Head of Chinese Works of Art Department in New York, commented: “We are thrilled with the tremendous results from today’s opening Asia Week sales, which were incredibly robust across a variety of artistic styles, media, and historical eras. We also saw strong participation internationally, with enthusiastic bidding from across the Asia region, including Mainland China and Hong Kong, as well as the US and all over the world. The Florence and Herbert Irving sale for the Met had a remarkably strong sell-through rate, and the works on offer represented some of the most exceptional examples of Chinese jade carvings to come to market in years. We are so pleased to have partnered with an institution as revered as the Met to support an endowment for future Asian art holdings.”

CHINESE ART FROM THE METROPOLITAN MUSEUM OF ART:
THE FLORENCE AND HERBERT IRVING GIFT
Auction Total: $8.3 Million
The day began with an outstanding offering of 120+ Chinese works of art originally gifted by philanthropists and renowned Asian art collectors Florence and Herbert Irving to The Metropolitan Museum of Art in New York. The auction achieved $8.3 million – more than double its high estimate of $3.8 million – with an exceptional 91.3% of all lots sold. The Met’s full proceeds from the sale will go into an Irving acquisition fund, to be used by the institution’s Department of Asian Art to continue the Irving legacy by seeking out artworks to further enhance the comprehensive nature of the institution’s holdings of Asian art.

A further selection of 200+ objects from the Irving Gift will be offered in the Saturday at Sotheby’s: Asian Art auction on 14 September.

The auction was led by A Massive Spinach-Green Jade ‘Dragon’ Washer, which fetched $1.3 million – more than eight times its high estimate of $150,000. Hewn from a massive jade boulder and carved to the exterior with powerful dragons writhing through swirling clouds and turbulent seas, the present washer can trace its form to an immense jade basin made 1265 and given to Khubilai Khan. The basin, sometimes referred to as the ‘Du Mountain washer’ or as a wine pot, is the earliest known jade carving of this monumental scale. It is carved from a single block of dark blackish-green jade, and measures approximately half a meter deep and up to 182 cm wide.

The sale also featured A White and Apple-Green Jadeite ‘Landscape’ Table Screen that achieved $1.1 million – more than eight times its high estimate of $120,000. Striking for the brilliant green tone of the stone from which it was fashioned, the present work appears to be the pair to a table screen in the collections of R.C. Bruce, H.M. Queen Marie of Yugoslavia, and Sir John Woolf. The natural striations and subtle variations in the stone’s color, which were cleverly incorporated into the design of both screens to depict rippling water, appear to match.