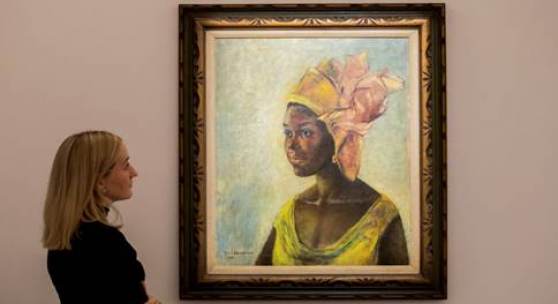 IGHEST TOTAL EVER ACHIEVED FOR A SALE OF MODERN AND CONTEMPORARY AFRICAN ART £4 MILLION / $5.1 MILLION

“If today’s auction confirms anything, it’s the position of African art as one of the most eclectic and exciting areas of the global art market today. Not only was today’s result the highest ever achieved for a sale of its kind, the auction included work from artists across 20 African countries – the highest number represented since we established the series in 2017. The star of today’s auction was Ben Enwonwu’s unforgettable portrait of his friend ‘Christine’, a work which seems to have had the same effect on our bidders as it did on us; we were simply blown away by her beauty. The market is going from strength to strength, and I encourage collectors and art lovers across the globe to watch this space as works by such incredibly talented artists continue to capture the attention of the art world.”

London, 15 October 2019: Sotheby’s fifth sale of Modern and Contemporary African Art today surpassed pre-sale expectations to realise £4 million / $5.1 million (pre-sale estimate: £1.9-2.8 million / $2.4-3.5 million) – the highest total ever achieved for a sale in this category. The sale featured over 100 works from 56 artists across 20 countries (the highest number of countries represented in such a sale) and established nine new auction records. There was strong competition from across the globe, with participants from Central and North America, Europe, Africa, Asia and the Middle East.

The sale was led by works from two 20th century masters of African modernism – GERARD SEKOTO and BEN ENWONWU. Four bidders competed for Enwonwu’s enchanting Christine over the course of a 13-minutes battle, pushing the final price to £1.1 million / $1.4 million – over seven times above the pre-sale high estimate (est. £100,000-150,000) to become the second highest price for the artist at auction. Painted in Lagos in 1971, the work precedes the artist’s famously record-breaking portraits of the Nigerian princess Tutu, and had remained unseen in the sitter’s family home ever since. The family were unaware of the significance of the painting or the importance of the artist, until a chance ‘googling’ of the signature led them to Sotheby’s free Online Estimate Platform. The artist’s Africa Dances from 1970 also achieved £471,000 / $596,333 (est. 150,000-200,000). In total, ten works by Enwonwu were 100% sold to realise a combined total of £1.8 million / $2.3 million.

Forming the cover lot of this season’s sale catalogue, GERARD SEKOTO’s Cyclists in Sophiatown was painted in 1940 and draws attention to the harsh reality of the lives of black South Africans in the years leading up to apartheid. Within ten years, the artist had been exiled and the residents of Sophiatown forcibly removed. The work achieved £362,500 / $458,961 (est. £250,000-350,000).