Art Deco Takes It Away: Cartier Bracelet sells for CHF/$ 6.1 million in Geneva 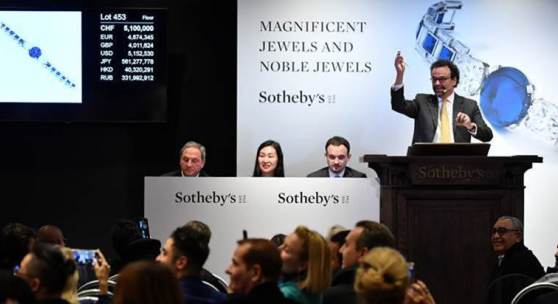 “The magic of Art Deco continues to exert its spell on collectors around the world, with so much of tonight’s rich offering racing away. With its sensational ‘sugar loaf’ Burmese sapphire and powerful geometric design, the Cartier bracelet that led tonight’s sale was a true masterpiece, among the most important Art Deco pieces we’ve ever handled. It came from the collection of a visionary Asian-American collector whose eye for great jewellery resonated with international collectors.”
David Bennett, Worldwide Chairman, Sotheby’s Jewellery Division

Geneva, 13 November 2019 – In the wake of the many strong results already seen this year for Art Deco jewels, demand remained strong today in Geneva for pieces from the 1920s and 30s, widely recognised as the golden era of jewellery. Six months after the benchmark price of $3.6 million achieved for the “Beaumont Necklace” at Sotheby’s in May, a Cartier sapphire and diamond bracelet today realised one of the highest prices at auction for an Art Deco bracelet when, pursued by six bidders, it sold to an Asian collector for CHF 6,072,900 / $6,135,451 (Lot 453, est. CHF/$ 2-3m). Created in 1927 and coming from an Asian-American collection, the bracelet is  set with a sensational Burmese cabochon sapphire weighing 46.07 carats. It was one of the highlights of a sale totalling CHF 53,382,275 / $53,932,112, characterised by strong global interest in Art Deco, along with a number of healthy results for single diamonds.

FACTS AND FIGURES AT A GLANCE

80% of lots sold
99.4% of lots sold achieved prices between or above estimate, with 58% selling above estimate
37% of bidders participated online
Participants came from 49 countries around the world
Strong activity from Asian collectors, approximately half of them female, with the top lot also selling to a female Asian collector
Female collectors continue their ascent (more than double the proportion of five years ago)
Great depth of bidding, with many lots pursued by multiple bidders (13 bidders on lot 386, 11 bidders on lot 381, 10 bidders on lot 387 and many further lots pursued by 6 or more collectors)

The result for the Cartier bracelet was echoed by further strong prices for Art Deco pieces – which together achieved a combined total of CHF 9.5m / $9.6m, against a pre-sale estimate of $3.9-6 million. Further highlights included:

80% of the diamonds offered in the evening session sold, including:

JEWELS FROM AN ASIAN-AMERICAN COLLECTION GLITTER

Tonight’s sale included a selection of jewels from an Asian-American collection, which followed a first instalment in September in New York. Overall, the collection was 93% sold, achieving a total of $ 12.7m (Est. $6.1-8.9m).