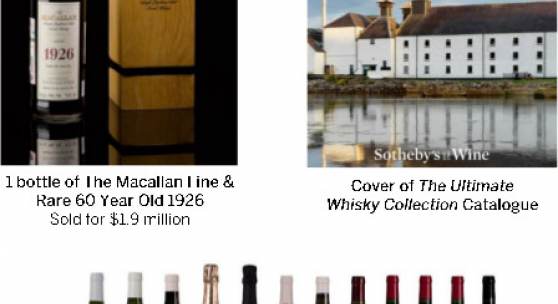 WORLD AUCTION RECORD FOR ANY BOTTLE OF WINE OR SPIRIT:
The Macallan Fine & Rare 60-Year-Old 1926 Sells for $1.9 Million

Jamie Ritchie, Chairman, Sotheby’s Wine, commented: “2019 has been another record-setting year for Sotheby’s Wine. We achieved our highest-ever annual total for both auction and retail, and continued to innovate, demonstrated by: the presentation of our auction catalogues as well as online-only sales; the launch of both our spirits business and the Sotheby’s Own Label Collection. There were several historic moments: in the spring, we had a monumental, $35 million, record-breaking weekend in Hong Kong, with the world auction record for any series of wine sales. This was followed in the autumn by our first-ever single-owner spirits auction, which saw the highest-ever price for any bottle of wine or whisky sold at auction. The launch of Sotheby’s Own Label Collection is a natural extension of our expansion into the retail business, providing a range of affordable wines that are classic examples and typical of each region. 2020 will be our 50th anniversary year and will celebrate the evolution of our wine business since our first sale in Glasgow in 1970.”

In October, our ‘white-glove’ sale of The Ultimate Whisky Collection smashed its pre-sale high estimate, achieving $10 million and establishing a new auction record for any bottle of wine or spirit when The Macallan 60-Year-Old 1926 sold for $1.9 million, far surpassing its estimate of £350,000-450,000. The landmark sale, held within the RM Sotheby’s Classic Car exhibition, bared witness to the highest-ever total for any whisky collection sold at auction, and the highest value wine or spirits sale ever staged by Sotheby’s London.

The tremendous success of The Ultimate Whisky Collection follows the addition of Spirits as a separate category within the Sotheby’s Wine ecosystem, in response to blockbuster demand for whisky and spirits at auction in New York and Hong Kong. The record-breaking sale occurred on the heels of the appointment of Sotheby’s first-ever dedicated Spirits specialist, Jonny Fowle, in May 2019. Based in London, Fowle leads Sotheby’s expansion into the whisky and spirits markets, pursuing single-cellar opportunities and direct consignments of high value bottles and casks, while building upon our online-only spirits offerings.

The same month, a two-day series of wine and spirits sales in Hong Kong brought a total of HK$150 million / US$19 million, a result which contributed to a record-breaking year for Sotheby’s Wine in Asia, bringing our annual total to HK$462 million / US$59 million. A bottle of The Yamazaki 50 Years Old 2007 release sold for an above estimate HK$2.4 million / US$300,272, making this the most valuable bottle of Japanese whisky sold by Sotheby’s in Asia.

Across three auctions in Hong Kong (1 April), London (17 April), and New York (4 May), all 75 of the limited-edition Château Mouton Rothschild Versailles Celebration Cases were sold for a grand total of $2.7 million. Full proceeds from the Hong Kong and New York tranches benefitted the restoration projects at the Palace of Versailles. Proceeds from the cases sold in the London auction, originally intended to fund restoration projects at Versailles, were donated jointly by Versailles and Château Mouton Rothschild towards efforts to rebuild the historic Notre-Dame Cathedral in Paris.

In September, the fourth dedicated auction of wines from the cellar of Don Stott totalled $5.9 million, outstripping the $4.4 million pre-sale high estimate with more than 80% of all lots sold above their high estimates. This brings the total for Sotheby’s Wine sales of The Don Stott Cellar to $25 million.

In November, a 10-day online auction of exceptional wines and wine experiences raised over $380,000 for the Cité du Vin, Bordeaux’s wine museum. The unprecedented sale – for which Sotheby’s joined forces with the Cité du Vin – raised funds to help develop the Cité du Vin’s 2020 cultural programme, in support of the museum’s mission to protect, celebrate and share wine’s heritage with a global audience.