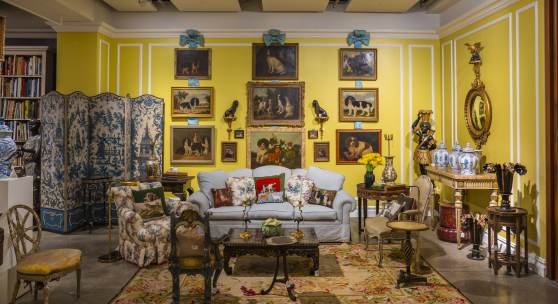 1,200+ Bidders Compete over a Marathon 22 Hours of Auction
Conducted by 8 Auctioneers

HALF OF ALL LOTS SOLD TO ONLINE BIDDERS

NEW YORK, 27 January 2020 – Sotheby’s two-day auction Mario Buatta: Prince of Interiors came to a close late Friday night in New York, achieving an outstanding total of $7.6 million – more than 2.5 times the sale's high estimate, and with an exceptional 99% of all 922 lots sold.

The blockbuster sale was dedicated to the extensive personal collection of legendary interior designer Mario Buatta, featuring furniture, fine art and decorative objects from his Upper East Side apartment and Gothic-revival house in Thompson, Connecticut.

Dennis Harrington, Head of Sotheby’s English & European Furniture Department in New York, said: “We are absolutely thrilled at the phenomenal reaction to the Buatta Collection, which inspired bidders from around the globe to compete day and night to acquire a piece of the late designer’s aesthetic. These results prove that Mario Buatta’s love of antique furniture, rich colors and patterns, and beautiful objects is still relevant to 21st-century collectors and designers – a legacy of which he would be immensely proud.”

Emily Eerdmans, design expert and co-author of Mario Buatta: Fifty Years of American Interior Decoration, commented: “There could be no finer tribute to Mario’s legacy than the incredible success of this sale. Sotheby’s shared our vision of showcasing and celebrating the Prince of Chintz with a catalogue, an exhibition, and a 22-hour blockbuster sale that will be long remembered.”

Below is a look at some of the objects that drove these exceptional results:

Acquired by Mario Buatta at Sotheby’s New York in 1973, this 20th-century Paris scene by Russian émigré artist Yury Annenkov led the two-day offering. The oil painting was once in the collection of prominent Philadelphia lawyer and collector, Maurice J. Speiser, who frequented Paris in the roaring twenties and formed lasting relationships with modernist writers, musicians and artists such as Annenkov, Ernest Hemingway, Sergei Prokofiev and Marc Chagall.

A flatware service by Buccellati sparked the most competition among collectors, with a staggering 28 bidders vying for the 174-piece set.
TOP DRAWER
A Chinese Export Black and Gold Lacquer Bureau Cabinet
Circa 1730
Estimate $50/80,000
Sold for $162,500

Distinguished by its unprecedented quantity and quality of lacquered works, the Buatta Collection featured a Chinese Export Black and Gold Lacquer Bureau Cabinet, which achieved the top price for the selection of furniture on offer. Acquired by Buatta at Sotheby’s in October 1983, this striking piece is one of the finest examples of its kind to appear on the market in decades, and forms part of a small group of similar works produced in Canton in the 1730s. An extremely closely related example is in London’s Victoria & Albert Museum.
BEST PERFORMANCE AGAINST ESTIMATE
A Pair of Anglo-Indian Low Tables
Estimate $500/800
Sold for $27,500

Exemplifying the fierce competition among bidders throughout the two-day sale, a Pair of Anglo-Indian Low Tables achieved the best performance against estimate, selling for 34+ times its $800 high estimate.
TOP DOG
Frances C. Fairman
The Boxer Rebellion
1902
Estimate $10/15,000
Sold for $50,000

Illustrating the designer’s love for what he called his canine ‘ancestors’, Frances C. Fairman’s The Boxer Rebellion led Buatta’s extensive selection of dog paintings. Prominently hung in the living room of his Upper East Side apartment, the oil painting depicts his favorite breed, the Cavalier King Charles Spaniel, and celebrates the treaty between England and France ending the Boxed Rebellion in China.
MOST ONLINE VIEWS
An Extensive Dodie Thayer Pottery Lettuce Ware Part-Service
Estimate $10/15,000
Sold for $60,000

Ahead of the auction, an Extensive Dodie Thayer Pottery Lettuce Ware Part-Service was the most visited item from the collection on sothebys.com, with nearly 5,000 views. Buatta acquired the service at a Sotheby’s auction in October 2003 from the Estate of Richard V. Hare.
MOST CHARMING CHINTZ
A Slipper Chair and Armchair With Matching Floral Chintz Fabric, Modern
Estimate $1,200/1,800
Sold for $11,250

No celebration of Buatta’s life would be complete without examples of the designer’s trademark floral print fabric.


Mario Buatta’s Manhattan apartment photographed for Architectural Digest in 1997. The living room is glazed in three shades of lime green and creamy white, with a faux-sisal painted floor. Over the sofa hangs Mario’s collection of dog paintings. Mario often joked, “These paintings are my ancestors. Seriously, I love dogs. I don’t have a dog because I have such a busy schedule, but I love viewing them on the wall.” Photo: Scott Frances for Architectural Digest/Otto Archive Bildquelle: Sotheby’s A
Sotheby’s Auktionshaus