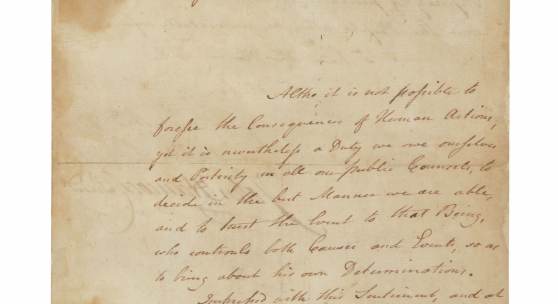 $1 Million Manuscript Letter Signed by John Hancock,
Announcing the Adoption of the Declaration of Independence
**
$437,500 Fire Engine Weathervane
Leads a Dedicated Auction Benefitting a New Folk Art Initiative at
The Museum of Fine Arts, Boston
**
American Furniture Topped by
An Exceptional High Chest Made in Connecticut circa 1775,
Sold for $200,000
* Leading an Auction Dedicated to the Collection of Barbara and Arun Singh *
**
A Rare Depiction of an African-American Sitter circa 1840,
William Matthew Prior’s Bust Portrait of a Young Black Gentleman
Achieves $112,500
* 9+ Times Its High Estimate *
**
Two-Day Sale Dedicated to
The Personal Collection of Iconic Interior Designer Mario Buatta
Achieves $7.6 Million in New York
2.5+ TIMES THE AUCTION'S HIGH ESTIMATE
With 99% of All 922 Lots Sold

NEW YORK, 29 January 2020 – Yesterday in New York, Sotheby’s annual Americana Week auctions concluded with a strong total of $20.1 million, surpassing the series' high estimate of $18.5 million – and with more than 1,620 lots sold across five auctions and six days.
Below is an overview of the highlights that led to these outstanding results:
Fine Manuscript & Printed Americana
Auction Total: $3.2 Million
The week closed with a selection of exceptional historical materials from our sale of Fine Manuscript and Printed Americana, led by a manuscript letter signed by John Hancock, announcing the adoption of the Declaration of Independence, 6 July 1776 which achieved $1 million – surpassing its $800,000 high estimate and achieving the highest price of the week. The text of the Declaration of Independence was first printed on the evening of 4 July 1776, by John Dunlap, with finished copies delivered to Congress the morning of 5 July. The number of copies printed is unknown, but were likely printed in substantial numbers – between 500 and 1,000 copies. The first copies of the Declaration were ordered by Congress to be “sent to the several Assemblies, Conventions & Committees or Councils of Safety and to the several Commanding Officers of the Continental troops.” One of those printings of Dunlap’s broadside would have been accompanied by the present extraordinary letter, signed by John Hancock as President of Congress.
Several lots achieved multiples of their estimates, including a copy of The New-England Primer, an exceptionally rare edition of the most enduring of all American children's books which soared to $62,500 – more than 15 times its $4,000 high estimate; an autograph manuscript fragment from George Washington’s undelivered first Inaugural Address which reached $137,500 – more than four times its $30,000 high estimate; and a book of maps executed by Emily Draper, a remarkable example of cartographic schoolgirl art, which achieved $50,000 – ten times its $5,000 high estimate.

Important Americana
Auction Total: $4.1 Million
The selection of American paintings on offer throughout the series was led by Ammi Phillips’s Portrait of a Seated Child in a Pink Dress with a Spaniel and Coral Teething Ring that achieved $250,000. Painted circa 1835, the child depicted in the present work is perhaps one of the youngest in the artist’s entire ‘Red Dress’ group, while the spaniel, featured in many of Phillips’ portraits, has been thought to be the artist’s own dog, trained to amuse the child during the mundane sitting process.
Further highlights include a Bust Portrait of a Young Black Gentleman painted circa 1840 by William Matthew Prior, which far surpassed its $12,000 high estimate to bring $112,500. The presence of African-American sitters in Prior’s work is expansive in comparison to other artists of his time, though his depictions of black sitters are still extremely rare, constituting less than one percent of Prior’s oeuvre. The present work is rendered in Prior’s flat style – identical to the way in which he had portrayed white men— and in some cases, the artist would sign his portraits of African-Americans both as an artistic statement and expression of his moral values.
Among the standout pieces of Chinese Export porcelain was a Chinese Export ‘Rockefeller’ Pattern Part Dinner Service that realized $150,000 – more than triple its $50,000 high estimate. This elaborately decorated group was originally part of a much larger service, with each individual piece painted in the center with a different scene depicting Chinese figures. Previously known as 'Palace ware', though with no particular connection to the Chinese Imperial Palace, the term was largely replaced by 'Rockefeller Pattern' in the 20th century due to several members of the famed American family owning examples from the service, including John D. Rockefeller Jr. and his sons, Nelson A. Rockefeller and David Rockefeller.
A number of John James Audubon’s prints from The Birds of America achieved top prices on Sunday, led by his depiction of an American White Pelican (PLATE CCCXI) that fetched $137,500 (estimate $90/120,000).