£23.1m for David Hockney’s The Splash at Sotheby’s 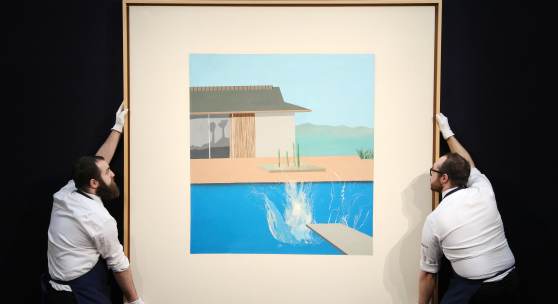 11 February 2020, London: Moments ago in London, The Splash sold for £23.1 Million / $29.8 Million in Sotheby’s Contemporary Art Evening Auction. The result achieved this evening is nearly eight times the price achieved when the work last sold at auction for £2.9 million ($5.4 million) at Sotheby’s London in 2006.

A breath-taking realisation of David Hockney’s Californian fantasy, The Splash was painted in 1966, and immortalises a fleeting moment just seconds after a diver has broken the calm surface of a swimming pool. The painting’s protagonist is present, yet absent, masked by a torrent of displaced water. The work is a quintessential example of Hockney’s lifelong fascination with the texture, appearance and depth of water - a fascination which culminated in one of the most celebrated and instantly recognisable bodies of work in 20th century art.

The work is the second in a series of three ‘splashes’. The largest and final of these, A Bigger Splash (95 by 96 inches), is a jewel in the Tate collection in London. The smallest, A Little Splash (1966), remains in a private collection, having never been offered publicly.


“I love the idea, first of all, of painting like Leonardo, all his studies of water, swirling things. And I loved the idea of painting this thing that lasts for two seconds; it takes me two weeks to paint this event that lasts for two seconds. Everyone knows a splash can’t be frozen in time, so when you see it like that in a painting it’s even more striking than in a photograph.”
Sotheby’s Auktionshaus