ONE-OF-A-KIND DESIGN BY FRANÇOIS-XAVIER LALANNE MAKES A SPLASH SELLING FOR $2.4 MILLION AT AUCTION 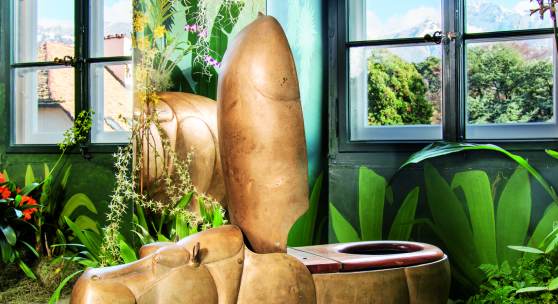 IN SOTHEBY’S PARIS $33,6 MILLION SALES OF CONTEMPORARY ART AND DESIGN INCLUDING SEMINAL PAINTINGS BY PIERRE SOULAGES AND ZAO WOU-KI

PLUS NEW AUCTION RECORDS FOR HERMANN NITSCH AND JÖRG TIMMENDORF

Sotheby’s sale of ‘Important Design’ was led by a one-of-a-kind hippopotamus themed bathroom suite, which sold for €2.1 million / $2.4 million (lot 115, est. €2-2.5 million). Designed by François-Xavier Lalanne, an artist renowned for his ability to transform the ordinary into the extraordinary, the three bronze life-size hippopotamuses - a mother and children – feature moveable parts that reveal a bathroom set like no other, comprising a bathtub, working sink and vanity, toilet and bidet. Commissioned in the nineties by the present owner, the sale marked the first time the spectacular piece has been offered at auction.

A further five works by the designer were offered in the ‘Important Design’ sale, which totalled €11.2 million / $12.6 million, soaring above its pre-sale estimate of €7.1-10 million. 82% of the lots offered were sold, with 70% of those exceeding their high estimates. The auction saw 52% of its participants bid online, and over a third of all bidders were aged 40 or younger. Among the other pieces offered by Lalanne was Lapin à Vent, which leaped beyond its high estimate to sell for €1.9 million / $2.2 million (est. €1-1.5 million) – the second highest price achieved in the sale.

Further Highlights: Aigle Vase by Alberto Giacometti more than doubled its high estimate to bring a total of €1.5 million / $1.6 million (lot 51, est. €400.000-600.000) in its auction debut. This is the second highest price realised for a vase by the artist, following Giacometti’s "Aigle” Vase that sold for $1.9 million at Sotheby’s New York in December 2019.