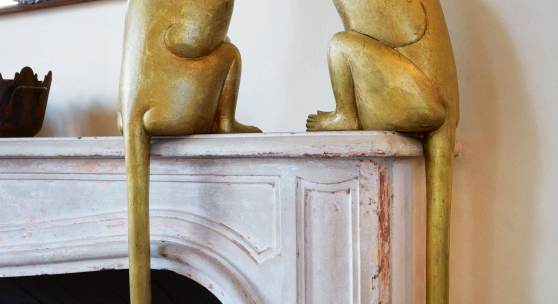 SIX WORKS FROM THE FANTASTICAL WORLD OF LES LALANNE
TOGETHER REALIZE $12.2 MILLION

Two Collectors Clamor for an Earthenware Vase by
Grueby Faience Company, Sold for a Record $431,250
After an Epic 45-Minute Bidding Battle
*More Than 47 Times Its $9,000 High Estimate*

NEW YORK, 3 August 2020 – Sotheby’s summer auctions of 20th & 21st Century Design concluded last Thursday in New York, with an exceptional total of $22 million against a pre-sale high estimate of $11.6 million for the series. The July offering achieved a new record total for any various-owner sale of Design at Sotheby’s worldwide, for the second consecutive year, and also featured a ‘white-glove’ sale (100% sold) dedicated to the celebrated furniture of American designer, Thomas Molesworth.

Jodi Pollack, Co-Worldwide Head of Sotheby’s 20th Century Design Department, said: “We are beyond thrilled with the resounding success of our summer season. These outstanding results include our highest-ever total in company history for a various-owner Design sale – amidst a pandemic no less – which speaks to the strong global demand and enthusiasm we continue to see in this space.  We remain committed to presenting the market with the very best offerings and collections across each field of Design, and we are seeing depth across each of these markets, from Tiffany and American Arts & Crafts, to French Art Deco and European modernism, to Contemporary Design. In addition, we managed to outpace our own top prices by leaps and bounds for works by Les Lalanne, which attests to the insatiable demand for these visionary artists. I am especially encouraged by the number of new bidders entering our Design sales in recent seasons, and we look forward to continuing this momentum in our fall sales series.”

Below is a look at the outstanding results that led to last week’s results:
IMPORTANT DESIGN
Auction Total: $20.2 million

A fantastic menagerie of works by Les Lalanne brought extraordinary prices in the first of Thursday’s offerings, with six works together achieving $12.2 million – more than five times their $2.4 million pre-sale high estimate.

Leading the group were two gilt bronze monkeys from the collection of Ambassador and Mrs. Felix Rohatyn, Singe II and Singe I by François-Xavier, which each brought $4 million and $3.5 million – a new auction record for a single sculpture by the iconic artist and any work from his coveted Singe series. While Lalanne explored the present Singe series in a variety of different patina colorations, it is undeniably the “gold monkey” that is most revered and sought-after by collectors today. The Singe series signals a moe from functionality to objet d’art and helped spur the revival of the motif towards the end of Lalanne’s decades-long career. Sotheby’s sales of the Rohatyn Collection continue this fall, including an auction dedicated to more than 30 paintings and drawings from the collection in October.

A rare example that seldom appears at auction and one of only three versions known to have been produced during the artist’s career, François-Xavier’s Capricorne II brought $2.4 million, quadruple its $500,000 high estimate. In addition: a single Grand Mouton de Peter – a spectacular and recent iteration of a career-defining leitmotif that can be traced back to the couple’s friendship with celebrated designer and architect, Peter Marino – bested its $600,000 high estimate to achieve $1.7 million; and a playful Petit Chien Prosaïque, also by François-Xavier, realized multiples of its $70,000 high estimate, selling for $596,000 and rounding out the exemplary works by the legendary artist and sculptor.

Among the many exciting moments from the morning sale, two collectors showed remarkable enthusiasm for a glazed earthenware Vase by the Grueby Faience Company, which soared past its $9,000 high estimate to achieve $431,250 – more than 47 times its estimate and marking a new auction record for the firm after a jaw-dropping 45-minute bidding battle. Just one lot prior, another Vase by the storied American ceramics company brought $72,500, 6 times its $12,000 high estimate.

Showcasing Louis C. Tiffany’s admiration for the natural world, a “Wisteria” Table Lamp led the dazzling selection of works by the iconic maker, selling for $716,000. The “Wisteria” model is not only an emblematic icon of the artist’s oeuvre, but also an exemplar of American design in and of itself. Designed by Clara Driscoll in 1901, the shade’s conventionalized floral forms and naturalistic coloration demonstrate the influence of Impressionism and Japonesque aesthetics that were popular at the time.