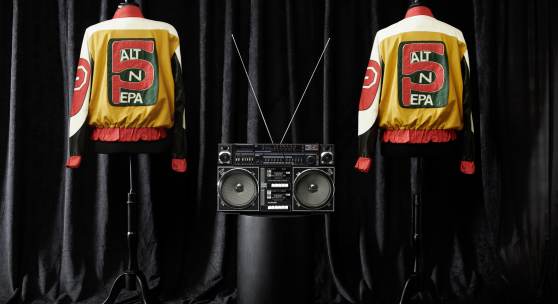 NEW YORK, 4 September 2020 – Sotheby’s is thrilled to unveil the full contents of our inaugural Hip Hop auction, to be held live at 6PM EST on 15 September in New York. A celebration of the history and cultural impact of Hip Hop, the sale reflects on the impact the movement has had on art and culture from the late 1970s through the “Golden Age” of the mid-1980s to mid-1990s, and up to the present. Among the newly announced highlights in the sale include the iconic Salt-N-Pepa “Push It” jackets; visual artist, filmmaker and Hip Hop pioneer Fab 5 Freddy’s ‘MTV’ ring made specially for Yo! MTV Raps; a private lyric writing lesson and studio session with the God MC Rakim Allah; a unique art installation by DJ Ross One entitled The Wall of Boom, which is comprised of 32 vintage boomboxes, and much more. The auction also features unique artifacts, contemporary art, one of a kind experiences, photography, vintage and modern fashion, historic and newly designed jewelry and luxury items, rare ephemera including flyers and posters, important publications, and more.

The auction was organized by Sotheby's Senior Specialist Cassandra Hatton, in collaboration with Monica Lynch, former president of Tommy Boy Records (1981-1998) who helped launch the careers of legends Afrika Bambaataa & Soulsonic Force, Queen Latifah, De La Soul, and Naughty by Nature, among many others.

The full sale will be on view by appointment in Sotheby’s York avenue galleries from 11 – 15 September and our digital catalogue will be live later today at Sothebys.com/hiphop.

The Grammy Award-winning Hip Hop group Salt-N-Pepa are offering their personal Idol Maker leather jackets worn in the “Push It” Geico commercial, which debuted during the 2015 Super Bowl (offered as a pair; estimate $12/18,000). The original “eight-ball” jackets, which the group wore in the “Push It” music video were so highly sought-after that they were stolen out of their dressing rooms years ago and had to be recreated by the original designer Christopher "Play" Martin of Kid 'N Play, who oversaw production at the Harlem studio of Dapper Dan. A portion of Salt's proceeds will benefit Truth Center Ministries, The INN (Interfaith Nutrition Network), and Life Camp, while a portion of Pepa's proceeds will benefit LIFEBeat and St. Jude Children's Research Hospital.

An iconic and unique piece of Hip Hop jewelry featured in the sale is Fab 5 Freddy’s gold and diamond ‘MTV’ ring on offer from his personal collection (estimate $20/30,000). The visual artist, filmmaker and Hip Hop pioneer had the ring custom made in 1988 when he became the first host of the groundbreaking and wildly popular music video show Yo! MTV Raps. Stylistically aligned with the thick gold chains, heavy medallions and oversized logos that were popular at this time, the ring is a completely unique piece designed with the assistance of Tito the Jeweler (aka "Manny"), the first Hip Hop jeweler who was known for creating custom over-the-top pieces and would later become jeweler to many Hip Hop stars including Rakim, Salt-N-Pepa, Biggie and LL Cool J, among others.