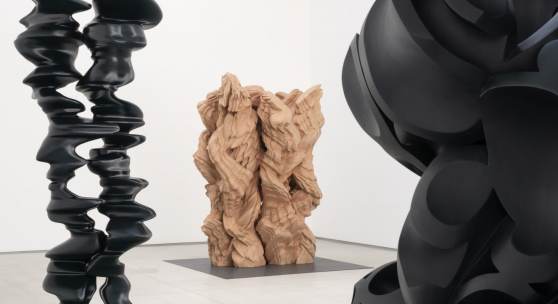 TONY CRAGG INHABITANTS: SCULPTURE ON VIEW AT OUR PARIS MARAIS GALLERY AND AS AN ONLINE VIEWING EXPERIENCE

View all Artworks with 360° Gallery Experience
Galerie Thaddaeus Ropac is pleased to present a solo exhibition of new works by Tony Cragg (b. 1949), one of the world’s most distinguished contemporary sculptors, exploring the complex relationships between the natural and material world to create a new sculptural language. The exhibition Inhabitants: Sculpture in the Paris Marais gallery features a dozen sculptures in bronze, wood and steel, made between 2018 and 2020. These new works connote the movement, change and transience of elements caught in the process of transformation. In recent years, heads and faces have made recurring appearances as leitmotifs in Cragg’s work. A circular form appears to morph, shaping the rhythm of the sculptures on display. Overlapping, layered structures and convoluted forms give rise to figurative landscapes that, while inherently physical forms, also map out their vacant spaces, becoming at once positive and negative structures in space.

Tony Cragg was born in Liverpool in 1949 and has lived in Wuppertal, Germany since 1977. He began his studies at the Gloucestershire College of Art and Design, before changing his course to the Royal College of Art, London in 1973. Since the 1980s, his work has been represented at many important international exhibitions, including documenta 7 and 8 in Kassel (1982 and 1987), São Paulo Biennial (1983) and the Venice Biennale (1980, 1988, 1993 and 1997). In 1988 he was awarded the Turner Prize, and in 1992 he was made a Chevalier des Arts et des Lettres. From 1979 he taught at the Düsseldorf Academy of Art, where he became Professor in 1988, and in 2001 he was appointed Professor of Sculpture at the Berlin Academy of Arts. Since 1994 he has been a member of the Royal Academy of Arts, London, and a member of the Academy of Arts, Berlin since 2002. In 2007, Cragg received one of the most prestigious art prizes in the world, the Praemium Imperiale. In 2009 he succeeded Markus Lüpertz as Rector of the Düsseldorf Academy of Art, a position he held until the end of 2013. In 2013 and 2014 Cragg lectured at the renowned Collège de France in Paris.