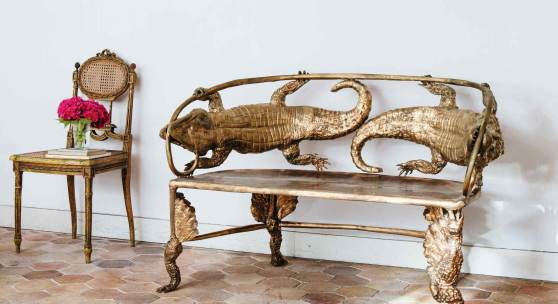 Bringing Our 2021 Auction Total for the Category to
$78.5 Million Worldwide

May Sale Series Highlighted by:

A Crocodile Settee and Pair of Croco-Consoles by Claude Lalanne
Together Realize $2.6 Million in New York

A Singe II Sculpture by François-Xavier Lalanne
Sold for €1.5 Million ($1.8 Million) in Paris

NEW YORK, 28 May 2021 – Sotheby’s yesterday concluded its spring sale series of 20th and 21st Century Design with an outstanding total of $40.7 million, and an overall sell-through rate of 90%. Comprising three auctions across two days in New York and Paris, the series outshone its pre-sale high estimate of $28.7 million, with 408 lots on offer.

These tremendous results bring Sotheby’s worldwide auction sales for the category to a running total of $78.5 million in 2021 – on track to eclipse our 2020 auction total for Design, which was $99.8 million. The May series also followed the record-breaking sales of works from the collection of Washington D.C. philanthropist and businesswoman Michelle Smith last month in New York, which achieved $45 million and set numerous auction benchmarks for coveted models by François-Xavier and Claude Lalanne, and Alberto and Diego Giacometti. Separate release available

Jodi Pollack, Co-Worldwide Head of Sotheby’s 20th Century Design Department remarked: “After an explosive start to our sale season with the collection of Michelle Smith last month, we are thrilled to finish a record-breaking sale series with the culmination of our May Design auctions in New York and Paris – each of which achieved prices well above their high estimates and with exceptional sell-through rates. Our resounding success was the result of both strong global demand and the presentation of superlative works spanning movements, materials, and forms, as well as a cohesive and creative campaign. Our vision this season was to create a holistic global event, offering the very best works by some of the most celebrated artists and designers of the last century, and we are delighted with the overwhelming response we saw from collectors who participated across the continents.”

Florent Jeanniard, Co-Worldwide Head of Sotheby’s 20th Century Design Department said: "We are thrilled with the results from our May auctions in Paris and New York. This remarkable momentum is a testament to both the unparallel expertise and drive of our worldwide team, as well as the voracious appetite of collectors all over the world, who illustrated feverish demand for works by leading artists such as Les Lalanne, Alberto and Diego Giacometti, and many more.”

Below is a look at the results that drove our success this week in New York and Paris:

Our two spring auctions of Important Design began on Tuesday, with the New York offering totaling an outstanding $21.3 million – well surpassing its $17.3 million high estimate. And on Wednesday 26 May, the Paris session sold 160 lots, which fetched a total of €14.6 million ($17.8 million) against a high estimate of €8.4 million ($10.3 million). Works by Harry Bertoia achieved top prices, including a 10-minute bidding battle for the artist’s Untitled (Dandelion) steel sculpture, which shattered its $200,000 high estimate to sell for $1.9 million – a new auction record for the artist and many multiples of Bertoia’s previous auction benchmark of $790,000, established at Sotheby’s New York in November 2015. In addition, another sculpture in gold bearing the same title, on offer from the Neiman Marcus Collection, brought $352,800.

In New York, all 25 works by legendary design duo Les Lalanne were sold, totaling an impressive $10.1 million against a combined high estimate of $8 million, with five pieces achieving prices over $1 million. This exemplary group was led by a Crocodile Settee by Claude Lalanne which brought $1.5 million, and two early Moutons de Laine by François-Xavier Lalanne from the collection of fashion designer Kay Unger, which each achieved $1.2 million and $1.1 million. A Pair of Croco-Consoles and a Unique "Structure Végétale aux Papillons" Chandelier, both by Claude Lalanne, sold for $1.1 million and $1 million, respectively.

A newly discovered and important Table by Isamu Noguchi realized $1.1 million, one of only three examples of the form hand-sculpted by the artist that are known to exist.

Spirited participation from collectors bidding online and, on the phone, drove strong results for works by Tiffany Studios, illustrated by a Rare "Fruit" Table Lamp which achieved $564,500. A “Pony Wisteria” Table Lamp and a “River of Life” Window by the firm each realized $239,400 and 226,800.

The Paris sale soared beyond estimate, with 72% of lots sold achieving prices in excess of high estimate, with the majority of top lots making multiples of pre-sale expectations: