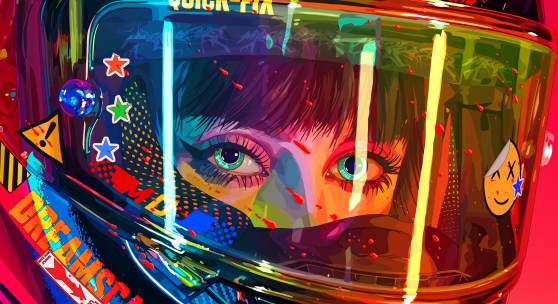 ‘White-Glove’ Natively Digital: A Curated NFT Sale Soars to $17.1 Million
With Nearly 70% of Buyers New To Sotheby's &
More Than 1,300 Bids Across the Sale

Kevin McCoy’s Quantum
-The First Ever NFT Minted in 2014-
Sold for $1.5 Million
Acquired by @sillytuna

NEW YORK, 10 June 2021 – From Sotheby’s saleroom in London earlier this morning, an extremely rare “Alien” CryptoPunk sold for $11.8 million, setting a new world auction record for a single CryptoPunk, one of the most coveted and recognizable works of digital art coming out of the NFT movement. The CryptoPunk was acquired by Shalom Meckenzie, the largest shareholder of DraftKings.

On offer from the collection of pseudonymous crypto evangelist and NFT collector Sillytuna, the result for the masked Alien #7523 drove the ‘white-glove’ sale total for Natively Digital: A Curated NFT Sale to $17.1 million, with all 28 works selling and setting an additional 14 artist records.

Created by Larva Labs in 2017, Alien #7523 is 1 of only 9 Alien Cryptopunks – the only one with a mask – and was released as part of the original edition of 10,000 unique CryptoPunks that were initially free to acquire for anyone with an ETH wallet. Since their release, Cryptopunks have become known as the ultimate synthesis of this crypto aesthetic, and reflect not just the philosophies of pseudonymity, community and tradability that the blockchain ecosystem so highly prizes, but also the elegant simplicity of the system.

Sillytuna, will also donate a portion of their proceeds to programs that support the CryptoPunk community as well as to organizations involved with COVID relief efforts across the world. Fact & Figures for Natively Digital: Nearly 70% of buyers and more than 75% of bidders new to Sotheby’s

49% of bidders under 40 1,300+ total bids across the sale Within the first hour of the sale opening for bidding, there were over 600 bids placed from more than 80 bidders on all 28 lots. Bidders from 28 different countries spanning North America, South America, Asia, Australia, Europe, and the Middle East.

14 artist records
Michael Bouhanna, Sotheby’s Contemporary Art Specialist, commented: “The concept for Natively Digital was born out of wanting to take a curatorial approach to the history of NFTs as digital art, as well as to showcase the breadth of artists working in the medium since it was first introduced about seven years ago. With today’s results, I think the concept proved very successful in featuring many of the artists who are at the forefront of this movement, as well as spotlighting the diverse spectrum of artists contributing to the rich NFT community. Led by the record-breaking result for the masked Alien, Natively Digital showed that there remains strong demand at all levels of the market for NFTs, and we are excited to continue to explore new and interesting ways in presenting these cutting-edge works.”

Natively Digital was also highlighted by one of the most historically significant artworks of the NFT movement, Quantum, by leading new media artist Kevin McCoy, which was acquired by @Sillytuna for $1,472,000. Universally regarded as the first NFT ever created, the animated Quantum is timestamped 05-03-2014 09:27:34 and was created during a Rhizome conference where McCoy created what he and his collaborator, Anil Dash, called at the time ‘monetized graphics’ – or monegraphs — by codifying provenance into an original digital work using blockchain technology. Generatively built entirely by code, Quantum was the first work minted in this way.

To showcase works from the sale, Sotheby’s mounted a global, multi-city exhibition, presented in partnership with Samsung, spanning galleries in New York, London and Hong Kong, which marked Sotheby’s first physical exhibition of NFT digital art. Alongside the physical exhibition, Sotheby’s also debuted its first-ever virtual galleries in the metaverse via Decentraland, occupying a prime location in the Voltaire Art District (map coordinates 52,83). The virtual presence in the metaverse was housed in a digital replica of Sotheby’s historic New Bond Street galleries in London featuring all five ground level gallery spaces as well as the figure of Sotheby’s London Commissionaire, Hans Lomulder, on hand to greet visitors.