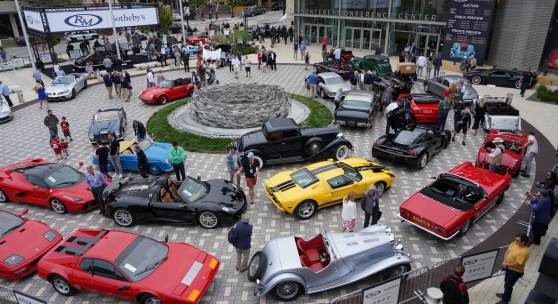 Complete results from the three-night Monterey sale available at rmsothebys.com
RM Sotheby’s auction calendar continues with Auburn Fall, St Moritz, Hershey and London sales
MONTEREY, California (12-14 August 2021) - RM Sotheby’s flagship auction grossed an astonishing $148,528,300 in total sales this past weekend, over the company’s three-night auction in Monterey, California (12-14 August), with an impressive 90 percent of all lots sold. Following a hiatus in 2020, the preview exhibition and sales at the Monterey Conference Center were well attended, resulting in bidders from 34 countries with 20% representing new clients.
The 2021 sale featured a pronounced line-up of cars, including numerous blue-chip automobiles at multi-million-dollar estimates. In total, 44 lots exceeded $1,000,000, 16 lots exceeded $3,000,000 and 4 lots exceeded $5,000,0000 over the course of the three-night sale.

The opening night of the three-day auction kicked off with the presentation of The Paul Andrews Estate Collection, a remarkable collection of cars, offered almost entirely without reserve. Led by the stunning 1962 Aston Martin DB4GT Zagato, the collection totaled $34,439,000 with 25 of the 26 lots finding new homes. One of only 19 DB4GT Zagatos built, this particular example was ordered new with numerous unique features specified by the original owner. It is undoubtedly one of the most collectable Aston Martins in existence and achieved $9,520,000 – proving to be the top seller of the night and overall top selling lot of the sale.
The two other lots to round off the top three sellers in Monterey were the 1962 Ferrari 268 SP by Fantuzzi and 1966 Ferrari 275 GTB Competizione, both of which were offered on the second night of the sale. On a night which saw Ferraris take seven of the top 10 most valuable lots to sell, the lure of the best examples of Maranello marque is stronger than ever. The 268 SP by Fantuzzi was a Scuderia Ferrari Works entry for the 1962 24 Hours of Le Mans and also a Factory racing and development car for the mid-engine V-8 configuration that became integral to the evolution of the Ferrari P-car series cars. Of the six produced, this is the only original example remaining that is fitted with the larger 8-cylinder engine. It is Ferrari Classiche Certified with the original Fantuzzi “shark-nose” body configuration, boasts matching-numbers throughout and has had only two private owners since 1969. The car is one of the most desirable competition Ferraris in the world and sold for $7,705,000.