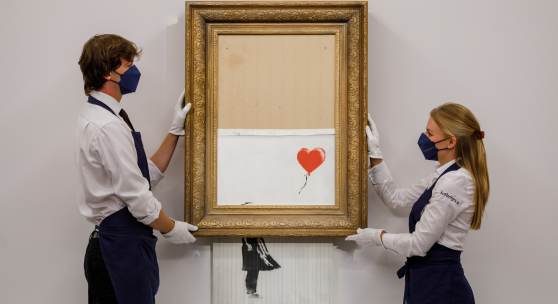 *9 Bidders in the Room, Online & Over the Phone Chased the Work for 10 Minutes**
**Triple Its £6 Million High Estimate*

Sale Marks Nearly Three Years to the Date Since the Work, Formerly Girl with Balloon, Shredded at New Bond Street in Unexpected Piece of Performance Art
& Set at Record for the Artist at the Time at £1 Million

"It is almost three years to the day since one of the most ingenious moments of performance art this century made auction history. It has been a whirlwind to follow the journey of this now legendary piece and to have it back in our midst, offering it tonight in the very room it was created by the artist. Banksy is no stranger to making headlines and this latest chapter in his story has captured imaginations across the world - we can only begin to guess what might come next.”
Alex Branczik, Chairman of Modern & Contemporary Art, Sotheby's Asia

Passing through a hidden shredder just seconds after the hammer fell, the “nation’s favourite artwork” Girl with Balloon seemingly auto-destructed while hanging on the wall in Sotheby’s packed auction room on 5 October 2018 in London. Capturing the world by surprise, this unexpected piece of performance art became instant art history, marking the first time a new work had been created during the course of an auction. In the days that followed, the shredded artwork was granted a new certificate and date by Pest Control, Banksy’s authentication body, and given the new title, Love is in the Bin. The collector who had placed the record £1 million winning bid on Girl with Balloon decided to keep the new work.*

Hailed as “Banksy’s greatest work” by The Guardian and the subject of a BBC prediction that it “will come to be seen as one of the most significant artworks of the early 21st Century”, Love is in the Bin sparked over 30,000 global news stories and swiftly became a cultural phenomenon.

Banksy is no stranger to Sotheby’s New Bond Street – some fourteen years earlier, in 2004, Banksy secretly stencilled a gangsta rat on the gallery wall during the exhibition preview of Damien Hirst’s Pharmacy sale.


Banksy, Love is in the Bin, 2018
Sotheby’s Auktionshaus