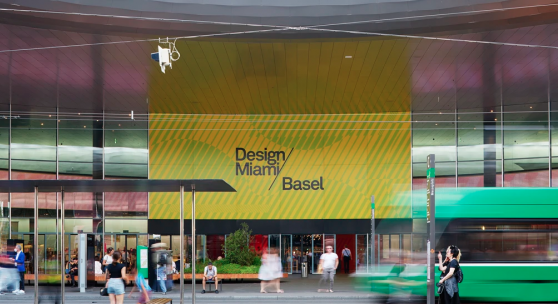 52 exhibitor presentations, including over 20 fresh faces Over 30 museum-quality works presented as part of Basel’s debut Podium exhibition, a curated, selling exhibition by Maria Cristina Didero around The Golden Age thematic This year saw the debut of the Special Satellite Projects program, including a large-scale Superblue installation Hybrid digital talks programme including livestreaming all in-person talks and a curated selection of exclusively digital talks online

“Coming together again for Design Miami’s first June Basel fair since 2019, the energy on the show floor was palpable. We were delighted to again embrace a truly hybrid fair format, sharing this year’s presentations and programming with collectors and design enthusiasts around the world via our digital platforms, offering them a window into what has been a very successful week”. Jen Roberts, CEO of Design Miami/.

Curated by this year’s Curatorial Director Maria Cristina Didero, the Basel fair saw the introduction of the Podium exhibition concept, a curated selling exhibition that is currently available to shop online at www.designmiami.com. The exhibition responded to the 2022 curatorial theme of The Golden Age, exploring this idea as a metaphorical concept, shared across cultures through time and space. Often invoked as an imaginary, past time of prosperity, Didero’s interpretation of the The Golden Age theme aspired to give hope and inspiration, imagining a brighter future for human beings and our planet.

GALLERY HIGHLIGHTS
Across this year’s gallery program, historical works were standout with many institutional quality pieces presented. Highlights included a prototype Moon Lamp by Gio Ponti showcased by Rossella Colombari. The piece was originally created for the Triennale in Milan in 1957. At Galerie Jacques Lacoste, the Parisian gallery presented a series of exquisite and rare works by French designer Jean Royére including the Anneaux dining table and Anneaux console in orange and black painted metal and opaline glass (c.1959).

Morentz gallery debuted at Design Miami/ Basel with an impressive presentation of 20th century work from European, American and Brazilian designers. With an incredibly thoughtful booth design, the pieces were curated to create the feel of an exquisite home - at the center was a fireplace designed in 1959 by Italian design collective B.B.P.R.

Amongst the contemporary works on show, Friedman Benda’s solo showcase of New York designer Misha Kahn’s work presented new works from his best-known series—Saturday Morning, Scrappy, Rock, Claymation—alongside recently-established methodologies, such as VR. Anchoring Kahn’s exhibition was a large-scale mohair rug, titled A Few Loose Ends. This dual-sided work belongs to a series of unique tapestries and carpets designed by Kahn and handwoven by Stephens Tapestry of Johannesburg and Eswatini.

Paris-based Galerie kreo presented a number of impressive new works at Design Miami/ Basel including QUOBUS 2,4,6 TWO-COLOURED by designer Marc Newson and the Signal R Polychromatic reading light by Edward Barber & Jay Osgerby. While at Carpenters Workshop Gallery the monolithic Constellation CO80 table in Red Persian Travertine by Beirut-based design duo David/Nicolas was a standout amongst the gallery’s presentation. From the designer’s Constellation series, CO80 is made of three travertine slabs connected by silvered brass zig-zag joints, hemispherical shapes cut out of the tables’ legs rotate from leg to leg, mirroring the lunar cycle.

CURIO PROGRAM/
This year’s Design Miami/ Basel saw 18 Curios present works that explore and push the boundaries of design and highlight new interpretations of traditional ideas. 16 of this year’s Curios were exhibiting in Basel for the first time, offering a unique perspective on contemporary and historic design.

Italian architect Stefano Trapani exhibited at Design Miami/ Basel for the first time with a series of works entitled The Essence of Experience, showcased within a stunning architecturally designed booth. The installation began with a passageway composed of uneven arches that were representative of the elements of life and experience gained during each person’s artistic and emotional journey. Amongst the work was the beautiful Charles Dix desk, a contemporary interpretation of an antique 18th century desk from the Biedermeier period. The rare white ebony of the desk has a strong black grain that looks almost like black ink drawings across the veneer.

Singapore-based Particle’s presented VELENI by design duo Lanzavecchia + Wai, an exploration of how humans continue to pollute the water we drink, the food we eat, and the air we breathe. The Curio served as a reminder of our problematic relationship with the poisons we produce: the polluting substances in VELENI are beautiful – reminding us that poisons can be as fascinating as they are harmful, as intriguing as they are dangerous, as attractive as they are repellent – but are always lethal. The objects were presented in an empty booth: a white canvas on which their messages emerged loudly. The Curio also offered a digital interaction with the objects through an augmented reality experience.