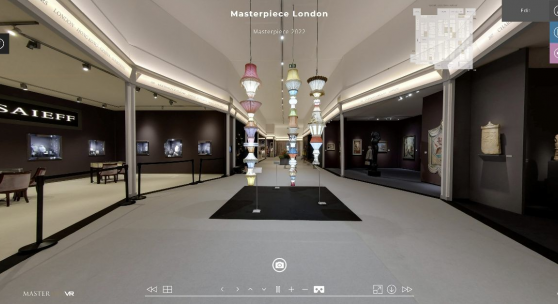 Masterpiece London (sponsored by Royal Bank of Canada) has returned as one of the world's leading multi-disciplinary art fairs, offering the finest works of art, design, furniture and jewellery, from antiquity to the present day.

Attracting established collectors and the culturally curious, the fair introduces visitors to objects they might not otherwise encounter and presents an unparalleled opportunity to discover exceptional works of art for sale. Held in a bespoke structure in the grounds of the Royal Hospital Chelsea, Masterpiece is an extraordinary week of cultural and social experiences, integrating over 130 exhibitors from every major market discipline.

Charles Ede
One of the worlds leading dealerships for ancient art, Charles Ede’s stand features works from Egypt, Greece and the Roman Empire, from an Alabaster canopic jar and exquisite Roman gold jewellery through to marble statues.

Godson & Coles
As part of their presentation combining fine eighteenth century English furniture with twentieth century Modern British Art, Goldson & Coles presents an important recently discovered Chippendale table. The giltwood and marble topped pier table comes from Nostell Priory for which Chippendale was commissioned to produce some of his most famous pieces of furniture.

Whitford Fine Art
Whitford Fine Art shows for the first time a selection of mutual portraits by Pablo Picasso and Polish abstractionist Caziel, made in the years after the artists befriended one another in Paris in 1948. These are presented alongside an equally market-fresh selection of important works by Caziel.

David Aaron
Specialists in ancient works, David Aaron will present the skull of a Triceratops dinosaur from the late Cretaceous Period, circa 68-66 million years ago, discovered in 2019 in Wyoming USA.

Robilant + Voena
Capturing the style and elegance of men of the past, Robilant + Voena presents a curated booth of portraits titled The Dandy. Tracing the evolution of menswear from the early seventeenth century to the fin de siècle, demonstrating the progress of fashion as well as its enduring significance for those who wear it.