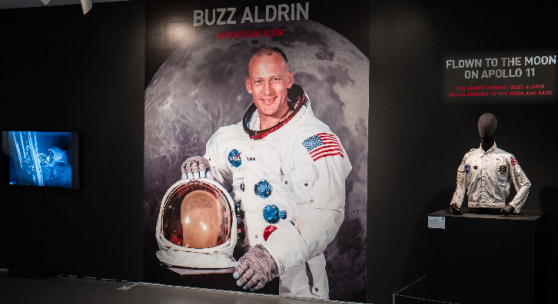 The Landmark Auction Was Led by: Aldrin’s Apollo 11 Inflight Jacket Worn to the Moon and Back, Achieving $2.8 Million *The Most Valuable American Space Artifact Ever Sold at Auction*

“Today's result is a testament to the legendary career of Buzz Aldrin and his lifelong dedication to the exploration and understanding of the universe. It has been a privilege to work alongside Buzz to bring such prestigious objects to market for the first time, and today's record breaking outcome proves the ongoing and everlasting significance of the Apollo 11 Mission, some 53 years since man first walked on the Moon.” Cassandra Hatton, Sotheby’s Global Head of Science & Popular Culture

NEW YORK, 26 JULY 2022 – The auction of Buzz Aldrin’s personal collection, containing space flown artifacts from the Gemini XII and Apollo 11 missions, astronaut training materials, and items from his early career, charted a new course in auction history, as it became the most valuable single space exploration sale ever staged, after achieving $8.2 million at Sotheby’s New York.

Today’s auction was led by Aldrin’s Flown Inflight Coverall Jacket, worn by him on his mission to the moon and back during the Apollo 11 Mission. Having remained in Aldrin’s private collection since he returned home from the moon on July 24 1969, the exceptionally rare garment was chased by multiple bidders for almost ten minutes before selling for $2,772,500, making it the most valuable American space artifact ever sold at auction and the most valuable jacket ever sold at auction. Further notable prices were achieved during the sale, including for Apollo 11 Summary Flight Plan containing a complete summary of the entire Apollo 11 Mission, from launch to splashdown. The nine-page booklet encloses the full timeline of the mission, including descriptions of the Lunar Module landing, the Lunar Surface EVA (Moonwalk) and Lift off from the Moon. Today the plan sold for $819,000 at Sotheby’s, over five times its presale high estimate.

Elsewhere a lunar surface flown Apollo 11 LM Systems Activation Checklist fetched $567,000 (est. $150,000 - $250,000). The 36 leaf checklist contains numerous manuscript notations made by Aldrin while on the lunar surface and was never intended to return to Earth bearing a ‘Jettison’ tag - meaning it was meant to be discarded on the moon in order to lighten the load during the crew’s return to Earth. Aldrin chose instead to retain this book, which has proved to be an incredibly rich source of information not previously known about the mission, as it notes additional items that were transferred from the Command Module to the Lunar Module prior to descent - including the Molded earpiece which sold for $81,900 in today's sale (est. $8,000 - $12,000), as well as numerous notes on the state of the Lunar Module following their descent.

Among the more practical items on offer in today’s sale was a Lunar Module Water Dispenser/Fire Extinguishing tool, a crucial piece of hardware designed to dispense measured amounts of hot or cold water for the purpose of rehydrating the astronauts meals for drinking and for extinguishing fires. Estimated between $12,000 - $18,000, the dispenser sold for $327,600, nearly 20 times its high estimate.

The sale also included the “Original Moonman” MTV VMA Statuette Presented to Aldrin in 1984, which sold for $88,200, surpassing its high estimate of $10,000 by more than 8 times. The “Original Moonman" statuette represents the deep and wide-ranging cultural influence of the Apollo 11 Moonwalk, with Aldrin’s silhouette from his moonwalk remaining the symbol of the VMAs nearly 40 years later--a testament to his indelible place in popular culture.

In connection with the scientific legacy of Aldrin’s career as an astronaut, eight lots from today’s sale were accompanied by a MIRAImage™ NFT, a unique digital identifier linked to its physical object using novel microscopic 3D scanning technology and advanced mathematical techniques that extract the object's identifying “DNA.” The sale marked the very first time that MIRA technology was applied to objects sold at auction.

In a statement provided before the auction, Aldrin commented: “This collection is a summation of my career as an astronaut, from my studies at West Point, to my first EVA during Gemini XII, to humankind’s first lunar landing on Apollo 11 where we planted the American flag, and a bit beyond. After deep consideration, the time felt right to share these items with the world, which for many are symbols of a historical moment, but for me have always remained personal mementos of a life dedicated to science and exploration. From the jacket that I wore on my trip to the Moon and back, to the famous broken circuit breaker switch that nearly ended our lives, and the pen that saved us, to various artifacts we used to complete the mission, I hope that this collection offers some insight into what it has been like to be Buzz Aldrin.”