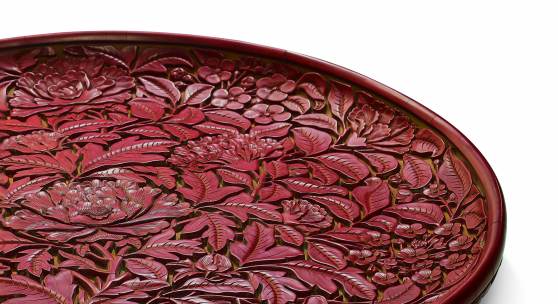 Sotheby’s London, 10 May 2017 – Sotheby’s May series of Chinese art sales in London concluded today having realised a combined total of £6,537,125 / US$8,481,920 / HK$66,158,976 – a sum in excess of the pre-sale estimate of £3.4-5 million. A selection of ceramics and works of art across the disciplines of imperial porcelain, lacquer, jade and Buddhist sculpture were presented across two auctions comprising almost 300 lots: Important Chinese Art and Menagerie, An English Private Collection of Chinese Animal Carvings. Key pieces in the Important Chinese Art sale had been unseen on the market in over 40 years and this factor, combined with their rarity, sparked intense interest from collectors. Returning to Sotheby’s London for the fourth time in its illustrious history, an extremely rare large carved cinnabar lacquer dish soared to £1.57 million, a sum almost one thousand times the price it achieved when last offered at auction in 1972. At that time, when early carved lacquer was still much of a mystery, the dish fetched £1,600.

Robert Bradlow, Senior Director, Chinese Works of Art, Sotheby’s London, said: “Over the last several days, our exhibition spaces have seen a steady influx of Asian collectors, many of whom made the special trip to London to inspect and enjoy the rich and broad spectrum of works on display. One of the biggest draws was undoubtedly the carved lacquer dish, which had emerged from a private collection after almost half a century. Interest in the piece translated into determined bids this afternoon, in a sale that also saw strong prices for Qing imperial ceramics and good quality jade.”

Representing one of the finest examples from the period when lacquer carving in China experienced its absolute peak, a Magnificent and Extremely Rare Large Carved Cinnabar Lacquer Dish from the late Yuan/early Ming period sold for £1,568,750 / US$2,035,453 / HK$15,876,533 (est. £400,000-600,000). With only two extant comparable examples – one in the Ashmolean Museum, Oxford, the other in a Japanese private collection – bidders seized the opportunity to acquire this 600-year-old piece, distinguished by the sensitive, naturalistic rendering of the flowers, the complexity and yet harmony of the luxuriant interwoven flower design, the impeccable craftsmanship of the carving, and the monumental dimensions (44.5cm). The dish was consigned from an Important Asian Private Collection, having successively formed part of three important collections, including that of Sir Percival and Lady David. A White Jade Ruyi Sceptre, Qing Dynasty, 18th/19th Century, notable for the quality and translucency of the stone and its delicate low-relief decoration, achieved the second highest price, selling for £452,750 / US$587,443 / HK$4,582,055, far exceeding a pre-sale estimate of £40,000-60,000, while A Rare Pale Celadon Mottled Jade Horse, Qing Dynasty, Yongzheng/Qianlong Period, skilfully fashioned in the round and sensitively rendered, sold for £116,250 / US$150,834 / HK$1,176,505.