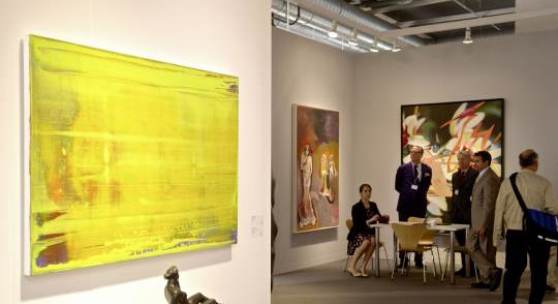 Outstanding quality attracts private collectors and museum groups from around the world, resulting in exceptionally strong sales for galleries

The 45th edition of Art Basel in Basel closed on Sunday, June 22, 2014, with galleries reporting exceptionally strong sales throughout the week and across all levels of the market, as Art Basel once again confirmed its position as one of the most important annual art events, and as the central meeting point for the international art world.

Art Basel, whose Lead Partner is UBS, presented 285 galleries from 34 countries across the six sectors of the show, exhibiting the work of over 4,000 artists. A total of 24 galleries showed in Basel for the first time, coming from Brazil, Chile, China, France, Germany, Italy, Mexico, Spain, the United Kingdom and the United States.

This year's edition saw significant changes to the urbanism of the show, redefining the visitors' experience: The only artworks displayed in Hall 1 were the 78 artworks making up the Unlimited sector, as Statements returned to Hall 2 after nine years in Hall 1, giving the younger generation of artists and galleries a more prominent placement. The Edition sector of the fair moved downstairs, creating a uniform layout on both floors. The auditorium and Magazine sector were moved within Hall 1, making this area accessible not only to ticket holders but also to the public. Therefore, for the first time, the entire Basel talks program of over 30 panels was free and open to the public. A total of over 2,400 people attended this year's talks program.

Galleries exhibiting within all sectors of Art Basel expressed their enthusiasm about this year's show:

‘Aside from the special addition of the richly rewarding '14 Rooms', improved architecture and layout added to the feeling of an upgrade in the 2014 edition of Art Basel. The spacious design of the fair delivers a feeling of calm and seriousness. We also witnessed the continuation of an important broadening of the market in geographical terms.
’ Sadie Coles, Sadie Coles HQ, London

‘Art Basel remains the most important week in the art world’s calendar. We were thrilled to place several works in museum collections, including the Bruce Nauman video installation we presented at Unlimited and a painting by Mark Bradford that went to the MAXXI in Rome. We can report equally incredible sales across the board – in fact, this has been our greatest Basel ever!’
Iwan Wirth, President, Hauser & Wirth, Zürich, London & New York

'Art Basel in Basel has a long history as the quintessential art fair, and the success this year has only reinforced its dominance. We brought contemporary masterpieces of the highest quality and placed them into important collections in both Europe and the United States. Art Basel is the place where the greatest collectors congregate and blue chip artworks find a home.'
Per Skarstedt, Skarstedt Gallery, New York & London

‘We saw once again this year that Art Basel is the artworld equivalent to the World Economic Forum, where key decision makers fly in from the four corners of the globe and the future of the art market is determined.’
Glenn Scott Wright, Director, Victoria Miro, London

‘Art Basel 2014 was not a one-day or a one-hour wonder for us, as is sometimes the case with art fairs. We have had significant and steady sales each day, with strong engagement from European and Asian buyers.’ Larry Gagosian, Founder and Owner, Gagosian Gallery, New York, Beverly Hills,
London, Paris, Rome, Athens, Geneva & Hong Kong

‘The fair was great this year. Sales have been excellent. We have received a lot of attention from collectors and curators with our solo presentation of Liu Wei, and in Unlimited with Xu Zhen and Zhan Wang.’
Theresa Liang, Director, Long March Space, Beijing

‘Art Basel gets better year after year. Our sales were very strong, and we were delighted to see that everyone from around the world was in Basel for the fair, apart perhaps for a few Brazilians who were more focused on the World Cup!’
Luisa Strina, Galeria Luisa Strina, São Paulo

‘We've had a very good year at Art Basel. The fair is an important meeting place for us and holds to very strong standards of quality. Though we have never done a fair in Asia we met a number of Asian collectors here in Basel, possibly an effect of Art Basel in Hong Kong, which was particularly interesting.’
Jocelyn Wolff, Galerie Jocelyn Wolff, Paris